These 10 flags are objectively the best in the world

When Andre 3000 asked the ladies “What’s cooler than being cool?!” on hit single 'Hey Ya!' the correct answer, despite overwhelming feedback, was not “ice cold” but was in fact; flags. So here is a brief rundown of the ten cooler than cool flags from around the globe.

But before we start, a few disclaimers. 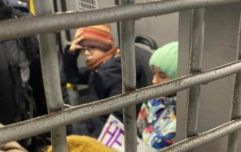 END_OF_DOCUMENT_TOKEN_TO_BE_REPLACED

First thing’s first, if you've clicked on this article expecting some Sheldon Cooper Fun With Flags rubbish click that cross in the top right hand corner. This article isn't for you. This is straight up, pure and noble vexillology.

Next thing, we’re talking real national flags here. Proper ones. Proper countries. To quote Pointless host Richard Osman; “By country we mean a sovereign state recognised by the UN”. So sorry Puerto Rico, sorry Guam, sorry Curaçao, but you won't be on this list. Not that your pathetic attempts at flags would have been anyway.

Finally, my list is definitive. It is final. I am speaking as somebody that has got 197/197 on Sporcle’s Flags of the World quiz on several occasions. I am a member of the Flag Institute. I have books, plural, purely about flags. I literally drink from the cup of flags.

So here we go, Flagheads; the top 10 (because JOE would not commission me to rank all 197) national flags:

You know what’s nearly as great as flags? Beer? Steak? Literally anything else? No: maps. There's a couple of flags that have maps on them, or at least the outline of the country, but given Kosovo’s flag looks like a logo you'd see on the Master League on Pro Evolution Soccer 6, we have Cyprus in at number 10.

ACTUAL FLAG FACT: The brief when designing the flag of Cyprus banned the use of blue and red, the main colours of the flags of Greece and Turkey respectively.

Think back to Euro ‘96 or France ‘98 and what comes to mind? Oh, you said Gazza’s goal against Scotland and Michael Owen scoring against Argentina. Awkward. I actually wanted you to remember Croatia’s amazing checkerboard kits, which were all thanks to the coat of arms on their flag.

ACTUAL FLAG FACT: The shields on the coat of arms are taken from the ancient arms of Croatia, Dubrovnik, Dalmatia, Istria, and Slavonia.

Plenty of flags have weapons on them; Angola have a machete, Saudi Arabia went with a sword. Both of those pale in comparison to Mozambique’s weapon of choice: an AK-47, which represents the country's defence and vigilance.

As Louis van Gaal will attest, attack is great but defence is even better, and that's why Swaziland’s majestic shield trumps the rifle of Mozambique. Swaziland’s flag does still come equipped with a couple of spears though, which should definitely help if you're ever in a fight with a man with a gun.

ACTUAL FLAG FACT: The black and white pattern on the shield represents a peaceful coexistence between all races in the country.

Johnny Cash’s 'Hurt'. The Clash’s 'I Fought The Law'. Sugababes' & Girls Aloud’s 'Walk This Way'. Panama’s Stars and Stripes. All cover versions that are arguably better than the original. And like all good cover versions, Panama put their own twist on the US flag they took inspiration from by removing the stripes and still managing to make it even better than the original.

ACTUAL FLAG FACT: The red and blue represent Panama’s opposing political parties, while the white signifies peace between the two.

South Africa, Czech Republic, Cuba: all flags with triangles on their hoist side, but what does Vanuatu’s flag have that they don't? Ferns and a boar’s tusk. You want to make your flag better, Czech Republic? Stick some ferns in your triangle. And maybe Petr Cech’s cap.

ACTUAL FLAG FACT: The boar's tusk is a traditional emblem in Vanuatu, and is worn as a pendant as a sign of prosperity.

ACTUAL FLAG FACT: The 24 points on the star represent the 24 electoral districts of the Pacific island nation.

OK admittedly the blue stripe on the fly side makes it look like somebody didn't crop the flag properly, but this has two of the key components of what makes a great flag: stars and diagonals. However, the best part of this flag is the contrast between the blue and the yellow, the same thing that makes the kit of Boca Juniors so iconic.

ACTUAL FLAG FACT: The triangular shape of the yellow section reflects the basic geographical shape of Bosnia and Herzegovina.

Look at that shade of blue, marvel at it, take it to your local Homebase and ask them to colour match it for you because you're going to want to want to paint every room in your house that colour. Add in the gold star and the gold and red diagonal, and you're onto a winner. Almost.

ACTUAL FLAG FACT: The shade of blue you're looking for when you go to Homebase is actually Pantone 286C.

Go to The Louvre and tear down the Mona Lisa, then head to the Sistine Chapel and make a start on amending the ceiling, because this flag is what should be in their place. This flag should be in every gallery across the world. This flag is art. Red and black have a striking contrast, there's stars, there's diagonals, and then what do they go and do to top it all off; they put a bird of paradise on it. Perfection.

ACTUAL FLAG FACT: The flag of Papua New Guinea was designed by a 15-year-old, whose life probably peaked at that moment.

popular
Some Stranger Things fans are now trying to cancel Metallica
Runner finishes last in 400m race as penis keeps falling out of shorts
'Empty Old Trafford' trends as Man Utd fans look to send Glazers a powerful message
Man books first-class flights for himself and his best friend - but leaves wife in economy
Pete Davidson in 'trauma therapy' after being 'triggered' by Kanye West's harassment
Asda slammed for 'embarrassing poorer families' with new product redesign
Man shows aftermath of crazy waterslide jump which went viral
You may also like
News
Brexit supporters wake up at 6am to swap EU flags for Union Jacks in Parliament Square
Uncategorized
PIC: This Father Ted/Radiohead flag is surely the best flag at Glastonbury this year
Music
The best and funniest flags spotted at Glastonbury 2017
Life
The hardest world flag quiz you will ever, ever take
Life
The 10 indisputably worst flags in the world
Next Page