Student orders takeaway so driver can get rid of a spider

This is a two-for-one deal really. A takeaway and a vanquished spider.

Home alone. Spider on the wall. Who do you call? Ghostbusters? No. Absolutely not. Deliveroo. Apparently. 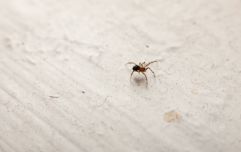 END_OF_DOCUMENT_TOKEN_TO_BE_REPLACED

Demi, a Criminology student from Bournemouth, found herself in a tight situation due to a severe arachnophobia, and had no-one else to turn to. A friend suggested she order food from Deliveroo, and see if the driver would be so kind as to remove the gentle creature from her home.

Apparently not wanting to order food for no reason (stupid - you can eat the food regardless of the spider), she slid into the Roo's DMs to ask exactly how possible the extra service was.

Fortunately for her, the delivery driver (appropriately named Joe) was well up to the task.

Although he did keep his helmet on. It definitely can't hurt you now mate. You're sound now pal. Unbreakable. 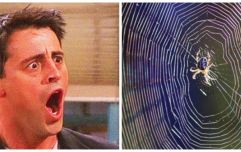 This man has an ingenious method of getting rid of spiders

END_OF_DOCUMENT_TOKEN_TO_BE_REPLACED

Demi told Buzzfeed about the ordeal, which quickly went from fine, to fine and then back once again to being fine:

"He asked how big it was and said he would give it a go, asking where it was. When I pointed at the top of the stairs handing him the tissue roll and getting him a chair to stand on, he then reached for the spider and accidentally dropped it on the floor where it began to run which made me panic more, he said: 'Look away, don't look'."

Judging by the picture: look how tiny the spider is. You can barely see the thing. Does this really warrant a 16" deep pan double pepperoni?

In my mind, yes. But only for the pizza.

Demi took to Twitter to express her gratitude after the ordeal to her knight, not in shining armour, but in a crash helmet and with a Deliveroo cube strapped to his back.

What a story. What a journey. Let's never, ever, do this again.