Some clever clogs has gathered over 3 million four-digit PIN codes and analysed the data in order to build a league table of the most common and least common PIN numbers.

END_OF_DOCUMENT_TOKEN_TO_BE_REPLACED

The top 20 most common PIN numbers are frighteningly predictable in some cases, but there are some funny ones just outside the top 20 that might make you chuckle.

For example, Bond fans might be tickled that the #23 most common passcode is 0007.

But the number one spot, in a very poor indictment of the human imagination, goes to 1234... 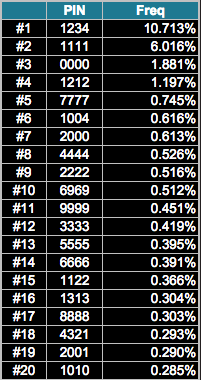 As you can see, the top two most frequently occurring PIN codes account for almost 17% of all passcodes, meaning you've got a pretty solid chance of guessing any given passcode. That means if you ever wanted to check your significant other's text messages, you now know just what passcodes to try.

As for keeping your phone protected, these are the least common passcodes: 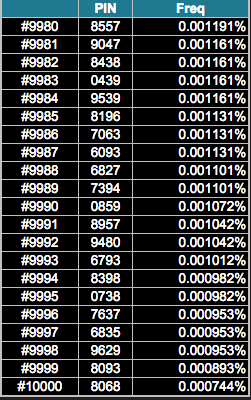 The least common, 8068, occurred only 25 times in 3.4 million PIN examples - but the trick clearly is to pick numbers in no discernible numerical order or keypad pattern.

popular
Woman left mortified after realising why postman ‘rudely’ chucked parcel through door
Woman horrified to find shop employee scrolling through her intimate photos for 15 minutes
Jamie Carragher and Roy Keane clash over Cristiano Ronaldo's role at Man Utd
Roy Keane cracks up Carragher and Hasselbaink with league title joke
Here's how to see who's been taking screenshots of your Instagram Stories
Evra bizarrely congratulates Messi for winning Ballon d'Or, despite winner not being announced
Harry Redknapp describes Man United decision to appoint Ralf Rangnick as 'ridiculous'
You may also like
News
Musk sets out UN conditions for $6B Tesla stock donation to end world hunger
News
People are baffled why billionaire Zuckerberg uses a bottle of BBQ sauce as a bookstand
News
Woman 'has proof' extra iPhone cameras are fake
Sponsored
Everything you need to take your streaming set-up to the next level
Tech
Sky Glass: Everything you need to know about the all-in-one WiFi TV
Next Page