So this is how airplane toilets are actually emptied

We've already got to the bottom of why the flight attendant sometimes makes you pull your blind up, but there's another plane question that bothers us:

How on earth do those plane toilets get emptied? 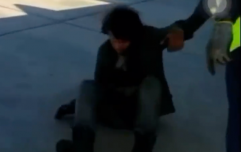 Stowaway emerges from wheels of plane after hours at 33,000ft

END_OF_DOCUMENT_TOKEN_TO_BE_REPLACED

Thankfully, there are some equally curious people out there at The New Zealand Herald who spoke to Air New Zealand at their brilliantly-named 'Pee Lab', to find out how these toilets actually... you know...work.

It turns out there's a whole lot of engineering behind the contraption: each toilet is made up of almost 300 parts, and they each cost $17,000 (£11,000) to be manufactured - making them some of the world's most expensive toilets.

The key component is a large tank - that can only be emptied when the plane is on terra firma - with a two-valve system that prevents any waste flushed in an airplane loo from ever leaving the plane and landing on someone's head on the ground.

The engineers, named Duan Russell, Jack Westcott and Peter Lowen, are good company for this cheesy but informative video.