Given that Storm Doris has now been elevated to the status of a weather bomb, caution is being urged as winds of up to 94mph along with snow and rain hit the UK.

In a tragic set of events, a woman in Wolverhampton has been killed by fallen debris as the weather continues to cause havoc.

Again, it's never a bad idea to exercise extreme caution in these hazardous conditions.

Here are some of the strongest gusts we have seen so far today from #StormDoris pic.twitter.com/SzkoRG0pH3 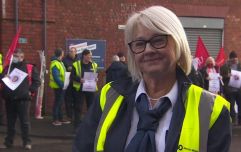 END_OF_DOCUMENT_TOKEN_TO_BE_REPLACED

We've all seen images of the devastating impact that Storm Doris has had, none more so than this footage of a Boeing 757 that was trying to land in Manchester Airport this morning.

After aborting the first attempt, the skilled pilot managed to loop around and make a safe landing shortly after.

The flight departed from Reykjavik earlier this morning and its descent into Manchester Airport was filmed making by airlive.net.

ALERT Go-around at Manchester Airport due to #stormdoris Impossible to land for now. Watch live on https://t.co/pvXE9CRKq6 pic.twitter.com/ODbTcmzbXg