We've all got that one relative who gets a bit sweary from time to time, but it's a touch more noticeable when you're in the royal family.

Prince William can barely contain his laughter when grandfather the Duke of Edinburgh loses his patience during a photoshoot alongside Battle of Britain veterans. 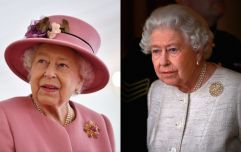 END_OF_DOCUMENT_TOKEN_TO_BE_REPLACED

After a comment from the photgrapher, Prince Philip responds with a very clear (and very rude) retort of "Just take the fucking picture".

It's happened to pretty much all of us at some point, but that doesn't mean it isn't funnier when the royals are involved.

popular
Man with world’s biggest penis says Oscar winner slid into his DMs
'Super recogniser' draws 'accurate' modern Maddie McCann to help police find her
Bride faints on groom, vomits and gets pooed on during ceremony
Mum in jail for murder pays tribute to son, 6, killed by his dad and new girlfriend
'I did three grams of coke during a game': Inside football's problem with Class A drugs
Bride considering putting unvaccinated guests on 'anti-vax' table at wedding
Chilling video shows moment step mum tried to get away with murdering boy, 6
You may also like
News
Prince Philip's will to be kept secret for 90 years 'to protect Queen'
News
King’s College apologises for Prince Philip photo due to duke’s ‘history of racism’
News
Puppy given to Queen while Prince Philip was in hospital has died
News
The Queen makes first statement following the death of Prince Philip
News
Prince Philip's funeral takes place at Windsor
Next Page