Nope, I'm done with these internet optical illusion memes, I won't look at another one as long as I...

In the wake of The Dress – an event so cataclysmic that it turned into a worldwide talking point literally overnight after the image was sent into BuzzFeed – optical illusions have been ten a penny online. 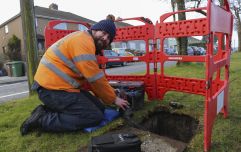 END_OF_DOCUMENT_TOKEN_TO_BE_REPLACED

They're irresistible, if somebody tells you that you won't be able to visually decode an optical illusion, you *have* to try, it's in our nature as humans.

And so here we are, staring down the barrel of yet another optical illusion that will cause you to scream at your computer screen until you finally see it, and then feel really stupid that it took you so long to figure it out.

A guy called Arron Bevin from Manchester posted this one to his Facebook page yesterday, and people are getting incredibly angry and upset about not being able to work it out.

Here's the image on its own – it took most people in the office over a minute to spot it.

Obviously, we could tell you what it is, but where's the fun in that? It's so obvious once you've spotted it that it's actually a bit embarrassing.

popular
Shipwrecked mum found dead saved her children by breastfeeding them at sea
Missing Instagrammer Gabby Petito's last text suggests 'she may have been 800 miles from last sighting'
The JOE Friday Pub Quiz: Week 261
Man eats ‘world's biggest burger’ in front of vegan protestors
'Gleeking' is the 'disgusting' bodily function that most people don't know they can do
Grimes says baby X Æ A-XII calls her by first name as she doesn't identify with 'mum'
Man has hand ‘chopped off at the wrist in London after vigilantes corner him’
You may also like
News
Openreach to install broadband for free in UK households on universal credit
News
Man divides internet over the way he leaves hotel room on check out
News
OnlyFans to ban sexually explicit content in just a few weeks
Entertainment
OnlyFans to move away from adult content in bid to reach $1B valuation
News
'Join the Police' website hackers label Met 'biggest gang of criminals'
Next Page