Britain's only ever prime minister assassination was by this terrifying motherf*****

How do you do, fellow Georgian period political assassins?

You probably won't remember Spencer Perceval, British prime minister, as he was only in office for three years. And those three years occurred at the beginning of the 1800s.

Still, you should be aware of his existence, if only because he is - to date - the only British prime minister to have been murdered. No, touch wood isn't a thing, Theresa. Stop knocking those ghoulish white knuckles of yours on the dining table. It's real mahogany, yeah? Stop it. Please. Now then.

Right. I have some observations and comments. Let's just fire through these, shall we?

If you look at the bottom half of his face, which is this, a Sylvester Stallone in Judge Dredd/Buzz Lightyear jaw:

And then the top half, which is this, Abraham Lincoln crossed with every single CEX employee you've ever encountered:

England returns to the pub after months away

END_OF_DOCUMENT_TOKEN_TO_BE_REPLACED

It doesn't make sense. None of his face makes sense. Literally none of it. But what do I know? I only see tens to hundreds of different faces every single day of my entire life. You'd find this guy sticking his head out behind a wardrobe in The Haunting of Hill House but would you see him on the tube, or in Pret, or anywhere in real world except stood at a fruit machine in a Yates, sweatbands on his wrists, pint of Strongbow in one hand and a Motorola Razr in the other?

The answer is no, no you wouldn't.

The image is the work of museum technicians at Queen Mary University of London, who used the skull of John Bellingham - which is the most famous item in the collection at their Pathology Museum - to digitise what the assassin would have looked like.

This is his skull, btw. I know some of you are into skulls. Some of you out there are really disturbingly into human skulls. And that's ok. As long as it doesn't develop. Keep it in check and we won't have a problem.


If you want a bit of background on John Bellingham, the new face set to haunt your nightmares, and are keen to wade, balls deep, into the circumstances surrounding the assassination of Spencer Perceval, fear not. I've got you covered. Here: wikipedia.org. 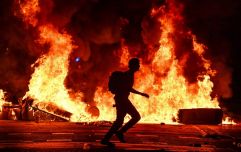 How 2020 became the worst year of our lives

END_OF_DOCUMENT_TOKEN_TO_BE_REPLACED

No, but seriously, he literally just shot the then prime minister in the chest with a pistol. BUT, but, he did it in, frankly, the best way possible.

In the pandemonium that followed, Bellingham sat quietly on a bench.

That's a baller move. I don't care if it is the Georgian era and he has just shot someone. That is sick. And then there's this.

Perceval staggered forward a few steps and exclaimed: "I am murdered!"

Imagine that. You're in the process of being murdered - you have quite literally just been shot in the chest - and blood is pouring out of you and your body is slowly growing weaker and weaker to the point of destruction and all you can think to do is exclaim the fact that you are being murdered.

Truly, a 10/10 political assassination by all concerned.

He was then arrested, trialled, hung, and his remains atomised so his terrifying remorseless stare could never be seen again.

You thought his terrifying remorseless stare would never be seen again. You thought.