These old IKEA chairs are now worth an absolute fortune

You could literally be sitting on a fortune.

If, like us, your home contains more than a few IKEA bargain buys, you might be surprised to hear that some of them could be worth a pretty penny now. 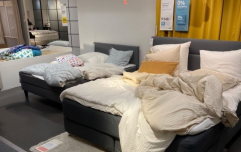 IKEA customers sleep in store showroom after being snowed in

END_OF_DOCUMENT_TOKEN_TO_BE_REPLACED

Yes, some of those flatpack furniture pieces have increased in value over the years, however, we never would have guessed by how much.

UK auction search engine, Barnebys, have found that many of the most classic styles from collections gone by are now worth a lot more, despite them being considered 'flop' products at the time.

One example is that of the IKEA Mushroom chair.

Originally designed in 1944 by Danish architect, Philip Arctander, the orange chair was fairly unpopular with customers at the time but is now selling online for upwards of €57,000 (just over £50,000).

Yep, the chair is a hot commodity on sites like eBay and Amazon, but it’s not the only one.

And the Amiral steel and leather chairs from the same year are also clocking up some impressive sales, going for nearly €1,000 online (£879).

Just another reason for us to hoard everything.