Guests escape their own murder at hotel inspired by serial killer

Not for the scaredy cats out there.

If you watch horror films behind pillows and scream at every monster that comes on screen, then this probably isn't for you... mostly because the walls will whisper to you.

END_OF_DOCUMENT_TOKEN_TO_BE_REPLACED

Yep, a murder mystery hotel is opening in London and it will certainly give you a fright.

The description of the website reads: "[The] immersive interactive psychological horror that draws inspiration from the historical events surrounding America’s first and most terrifying serial killer – H.H.Holmes – the man whose preferred instrument of murder was a hotel.

"After its unexpected closure, The Hollow Hotel invites you to its grand re-opening. But if you listen to the whispers in its winding corridors, you might lose yourself as each turn entices you to delve further in; until you can’t turn back. 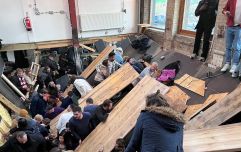 END_OF_DOCUMENT_TOKEN_TO_BE_REPLACED

"Journey through a maze of hidden passageways that will either lay you to rest, or lead you further into the hotels’ dark heart."

Think you'd be up for it? While we're not sure what happens after you're "laid to rest" but it would be fun... right?

We also don't think you'd do much sleeping in the hotel with killers going around and what not... but if you want to get on board with it, you can check out more information here.