WATCH: Muhammad Ali's perfect reply to being told 'not all white people are racist'

Parkinson didn't know how to respond.

It's unfortunate that in this day and age people still tend to lean on the "not all white people are racist" argument whenever racism is challenged. It is often utilised to distract from the real discussion needing to take place and unfortunately, it can work, as people quickly get swept away by the reassurance that "not all white people are racist" and therefore that the behaviour is relatively rare and their own apathy an acceptable response. 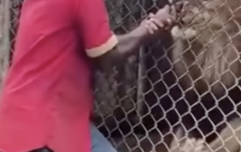 END_OF_DOCUMENT_TOKEN_TO_BE_REPLACED

This is of course completely wrong, and legendary boxer and activist Muhammad Ali had it spot on almost 40 years ago, explaining why the argument falls through during a groundbreaking appearance on Parkinson in 1971.

Ali lucidly and intelligently comments on a number of issues surrounding race and culture, but perhaps most memorable is his answer to the "not all white people are racist" argument, tearing it down to its bare bones and showcasing it for the insignificant pandering to the masses that it is.

He told Parkinson: "There are many white people who mean right and in their hearts wanna do right. If 10,000 snakes were coming down that aisle now, and I had a door that I could shut, and in that 10,000, 1,000 meant right, 1,000 rattlesnakes didn't want to bite me, I knew they were good... Should I let all these rattlesnakes come down, hoping that that thousand get together and form a shield? Or should I just close the door and stay safe?"

It is, of course, embarrassing that his words so long ago are still entirely relevant today, but it is also a tribute to the man that, not only was he ahead of his time, he was ahead of our own, too.

popular
Liverpool crowned Premier League champions, but only on aggregate
Ukrainian refugee who ran off with dad finally speaks out and blames man's partner for split
This 'Welcome to Luton' prank sends Gatwick Airport arrivals into a frenzy
Noel Gallagher left 'covered in blood' after headbutt from Ruben Dias’ dad
Volcano where mutant sharks live in acidic underworld crater is erupting
Topless mum in her undies rescues pet goose from bald eagle in crazy video
Johnny Depp trial: Kate Moss ‘testifying’ in defamation case against Amber Heard, report claims
You may also like
Sport
Muhammad Ali's grandson on the pressure of legacy and YouTube exhibitions
Entertainment
HBO has an epic new Muhammad Ali documentary coming, and the trailer looks fantastic
Entertainment
Netflix's brand new documentary series is a must-watch for sports fans
Sport
Biggest difference between Anthony Joshua and Muhammad Ali, according to Frank Warren
Sport
Try not to get angry over this Anthony Joshua-Muhammad Ali comparison
Next Page