Summer is delightful, but it is also hell if you have hay fever

Everyone else is having fun in the park, but if you even open a window, your eyes go on fire, your whole face is itchy and your nose splashes out oceans of snot. 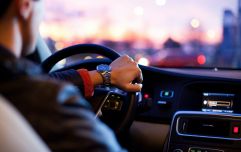 DVLA warns of £1,000 fine if you fail to declare over 200 medical conditions

END_OF_DOCUMENT_TOKEN_TO_BE_REPLACED

Which means you end up spending a fortune on various tablets and nasal sprays to get you through the day.

However, motorists in particular need to be careful. Several different hay fever medications, including chlorphenamine, hydroxyzine and promethazine, have side effects that can include drowsiness.

And driving under the influence of any drug is illegal if it impairs your ability to drive – regardless of if the drug itself is legal.

According to insurance site Confused.com, “you shouldn’t take this sort of medication, or any other that says ‘may cause drowsiness’, if you’re planning on driving”.

The police have the power to pull you over and give you a'field impairment assessment' to gauge if you are under the influence. And if you were convicted, you could face a twelve month driving ban, an unlimited fine, and even six months in prison. And with that, would come a criminal record.

According to Confused.com, up to 58 per cent of drivers who suffer from hay fever admitted driving after taking antihistamines.

It should be obvious, but it always worth repeating: always follow the advice of your doctor when taking any medication, and always reading the information that comes with it.

popular
Ava White: Boy, 14, charged with murder of 12-year-old in Liverpool
Man chops off two fingers in mission to become fully-fledged 'black alien'
Iceland boss says staff won't force shoppers to wear masks despite rules
Woman left mortified after realising why postman ‘rudely’ chucked parcel through door
Icelandic goalkeeper gets teammate sent-off after faking an injury following bust-up
Roy Keane cracks up Carragher and Hasselbaink with league title joke
Preacher says reptile masked as her husband tried to have sex with her
You may also like
News
Woman starts driving over Insulate Britain protestor in furious standoff
Life
Road is so shit 11 vehicles crash on it in four weeks - even a cop van
Life
Drivers face fines and three points on their licence after new motorway camera charge
Life
Driving licence warning as new change this week could land drivers £1,000 fine
News
BMW drivers voted the worst drivers on the road
Next Page