Former Conservative Party aide and New York Observor columnist Andre Walker kicked off a bit of a meme this weekend.

Walker tweeted a message to ISIS, which has since been deleted, but your friends at JOE screengrabbed the original before it went AWOL. 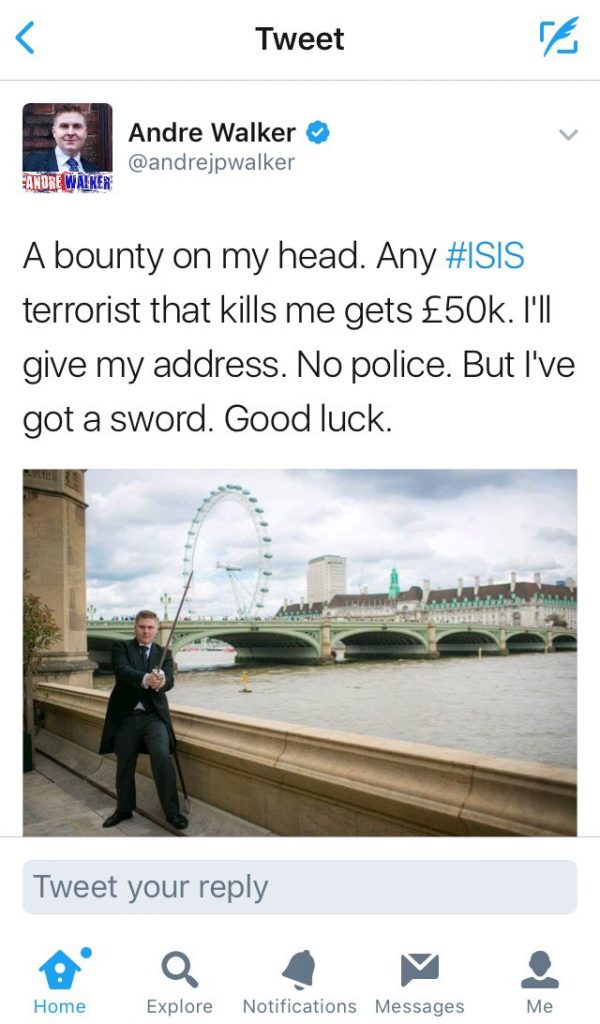 END_OF_DOCUMENT_TOKEN_TO_BE_REPLACED

Within three hours of the tweet going up (and then coming back down), there have been well over one thousand responses, with the internet's best and brightest putting their Photoshop skills to the test to place Walker in any given number of different scenarios.

And to be fair, some of these are absolutely inspired.

Ooh, so there is! pic.twitter.com/tIZe3DOJ3t

popular
Love Island extended tonight for ‘most dramatic and explosive Casa Amor ending' in show history
Dad who left partner for Ukrainian refugee is now her full-time carer after she became partially blind
Chelsea set to hijack Frenkie de Jong deal, offering two players plus cash
British Airways jet catches fire as passengers and crew are evacuated after flight from London
Premier League club faces call to suspend international player over rape allegations
Boris Johnson says he is 'so sad to give up the best job in the world'
‘Bye, bye Boris’ song playing in the background of PM’s resignation speech is the finale we all needed
You may also like
Travel
Swimmers turn on shark and attack it with mop as it approaches beach
Entertainment
Teens are turning up to watch Minions in suits - and why cinemas have been forced to ban them
News
Woman becomes attracted to a fence and has physical relationship with it
News
Wedding day ruined by neighbour as she mows the lawn whilst bride walks down the aisle
News
Twitter reacts to Nerf's new official mascot with horrified fans labelling it 'terrifying'
Next Page