Man gets hit by a bus, somehow comes away without a scratch, and walks right into a pub

The bloke is fine, but he does get hit by a bus. If you don't want to see that, again, don't watch it, but since you clicked on the article with 'Man gets hit by bus' in the headline, we assume that you're alright with it.

END_OF_DOCUMENT_TOKEN_TO_BE_REPLACED

A bloke - a bloke named Simon Smith - was walking along Gun Street in Reading when he got hit by a bus.

Usually that's the end of the story. Being hit by a bus is generally a one-way ticket to being dead, but by some miracle, Simon managed to not only survive but get away with very minimal injuries.

What else you gonna do after getting hit by a bus? Yep, causally stroll in The Purple Turtle. Staggering footage from Saturday. #rdguk pic.twitter.com/YslFKWYDDP 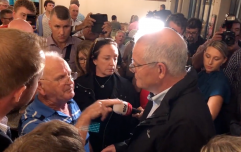 END_OF_DOCUMENT_TOKEN_TO_BE_REPLACED

As you can see, the bus launches Simon into forward, crashing down to the ground and sliding along the pavement on his side. The bus appears to catch a shop front, sending shards of wood and glass flying.

Incredibly, neither Simon nor the driver were hurt. No arrests have been made following the incident. Reading Buses told the BBC that it was an "awful incident" and that it was investigating.

But perhaps the most amazing thing about the video is not only that Simon is able to stand up and walk away, but that he walks into a bar - The Purple Turtle.

Given that it was just after 9:00am, it's unlikely that the bar was open and serving, but let's be honest, if were hit by a bus and came away with barely a scratch, a stiff drink would be high up the list of necessary next steps.

popular
Incredible case of the only known individual whose parents were two different species
TikTokers are utterly convinced there is a secret zombie apocalypse going on in China right now
Time traveller’ claims to know exact date Queen will die
Women need to be dating men 10 years older than them, says relationship coach
Darius Danesh opened up about his health struggles before his tragic death aged 41
Jealous man glued wife's vagina shut as he caught her cheating with four men
People compare reaction to Tommy Lee's explicit post with the scrutiny Britney Spears is facing
You may also like
Sport
Inside the UK's biggest sports bar - set to open ahead of 2022 World Cup
News
Wetherspoons bans punter after he punches seagull to death for stealing chip
Food
Budweiser Budvar: Exploring Czech pub culture in the world's thirstiest country
News
Johnny Depp was in a pub in Newcastle while the verdict of his defamation trial was read out
News
Pubs planning on selling 6p Jubilee pints have changed their minds - and are now giving them out for free
Next Page