Love it or hate it: Marmite counts as a liquid at airport security

Did you know Marmite technically counts as a liquid?

Neither did we. Everyday is a school day. 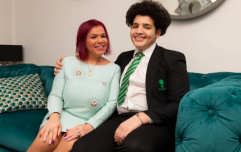 END_OF_DOCUMENT_TOKEN_TO_BE_REPLACED

And we are not alone: Passengers at airports across the UK are falling foul of security checks because some seemingly solid foodstuffs count as banned liquids.

Airports report that delicious items such as jam, Marmite and baked beans are being confiscated from unwary tourists who try to take them home in their hand luggage, ITV London reports.

Don’t despair at all the wasted munch, though: The airport says it donated 300 items collected at security points to a food bank in east London.

popular
Bride asks for divorce day after wedding following groom's disrespectful cake stunt
Chelsea forced to change Stamford Bridge changing room after Liverpool complaint
McDonald’s has removed the ‘best item’ on its breakfast menu for good
Pierce Brosnan has the perfect response to trolls who attack wife's weight
Evan Rachel Wood claims Marilyn Manson ‘essentially raped her’ in music video
TikTok star Jack Wright accuses Sienna Mae of sexual assault
Katie Price could be jailed for five years after arrest on Friday
You may also like
Life
Vegans outraged over 'ignorant' sign put up by 'psycho' butchers
News
Capitol Hill rioter asks judge for permission to use his social media to find him a date
Life
One in 30 people poo in the shower and you all need to be stopped
Life
Devastating solar storm 'could send mankind back to Dark Age', says new study
Life
'Where we about to eat at?' viral star dies aged 6
Next Page