Anyone who's decided to do a bit of online route-planning today may well have stumbled upon a geeky surprise.

You will all be familiar with the little man who sits in the bottom right of the screen on Google Maps. Clicking him enables the Street View feature.

Go looking for that man today, however, and you'll see that he's been replaced by a pixelated version of Link, star of The Legend of Zelda series. He's even holding his famous Master Sword. 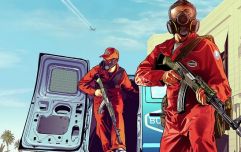 END_OF_DOCUMENT_TOKEN_TO_BE_REPLACED

Quite why this is, we're not entirely sure.

Google are no strangers to dropping gaming-related Easter eggs into the Maps program - Pac-Man munched his way in once too - but we suspect it has something to do with Zelda celebrating its 30th anniversary not long ago.

Today also marks the HD re-release of The Legend Of Zelda: Twilight Princess on the Wii U, so it could be a clever piece of marketing from Nintendo.

Either way, it's not every day that you can take arguably gaming's most beloved adventurer on a world tour, so we thought we'd be really imaginative...

Imagine a boss battle in there...

popular
Jake Paul accused of sexual assault by TikTok star Justine Paradise
People fighting over name of game where you knock on someone's door and run away
Man faces three years in jail in Dubai for legally smoking marijuana in his own country
Flatpack expert charges people to assemble Ikea furniture after job loss
Covid lockdown 4: Could it really happen and how can we prevent it?
Spurs and City fan groups issue joint statement criticising ticketing for Carabao Cup final
QUIZ: Can you get 20/20 in this desperately tricky capital cities quiz?
You may also like
Gaming
The first trailer for the new Aliens video game has arrived
News
Pigs can play video games using their snouts, according to new study
Entertainment
GTA VI rumoured to feature series' first ever female protagonist
Gaming
QUIZ: How well do you remember video games in 2020?
Sport
EA Sports respond to 'baseless' lawsuit over alleged scripting in FIFA 21
Next Page