That is what happened to an unfortunate lawyer, who joined a hearing held on Zoom while using a filter that made him look like a cat.

The meeting was being held by the 394th Judicial District Court in the United States, and despite the host's screen explaining in text that recording the hearing was prohibited, a recording did make its way onto social media and has now been viewed more than five million times on Twitter in less than three hours. Because the Judge tweeted it.

The clip shows Judge Roy Ferguson telling Rod Ponton that he has "a filter on in his video settings."

"You might want to..." he continued before Ponton interrupted with a panicked noise that can only be described as chilling.

"Can you hear me, judge?" Ponton asked, still appearing as a petrified cat.

"I think it's a filter," the judge explained. 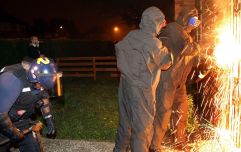 END_OF_DOCUMENT_TOKEN_TO_BE_REPLACED

"It is, and I don't know how to remove it. I've got my assistant here and she's trying to, but..." Ponton replied.

Seemingly giving up on trying to get rid of the cat filter, Ponton then suggests moving forward with the meeting anyway, even though he appears on screen as a cat.

"I can see that," the judge responds.

“I can see that,” responds judge pic.twitter.com/HclKlAUwbM

Judge Ferguson tweeted the clip out, with the caption: "IMPORTANT ZOOM TIP. If a child used your computer, before you join a virtual hearing check the Zoom Video Options to be sure filters are off. This kitten just made a formal announcement on a case in the 394th (sound on)."

popular
A definitive ranking of every swear word from worst to best
TOWIE star Mark Wright is officially the worst player on FIFA 21
Donald Trump's star 'to be permanently removed' from Hollywood Walk of Fame
'That Vegan Teacher' banned from TikTok after 20,000 people sign petition to remove her
Man Utd youngster Shola Shoretire released by Man City for training with Barcelona
Ex-Atalanta and Ivory Coast player Willy Braciano Ta Bi dies aged 21
PlayStation and Xbox users will now be able to play against each other online
You may also like
News
UK daily coronavirus deaths fall by half in past two weeks
Entertainment
Reading and Leeds festivals WILL go ahead this summer
Sport
Tiger Woods "responsive" after surgery on car crash injuries
News
Tiger Woods taken to hospital after being pulled from car after collision in Los Angeles
News
Queen's relative jailed following sexual assault at ancestral home
Next Page