In praise of pre-drinks, the best part of any night out

We know all the ingredients for a big night. It’s like a formula. Every night is different, but they’re also exactly the same.

END_OF_DOCUMENT_TOKEN_TO_BE_REPLACED

The best bit of that formula though, the bit that always provides the biggest laughs, the best stories, the lasting memories, doesn’t come on the night out. It doesn’t happen in the tacky happy hour cocktail bar or on the dancefloor of your shit hometown club. It’s not that bit at 3am where the DJ puts on ‘Mr. Brightside’ and you and all your mates grab each other by the T-shirt sleeves, bounce up and down and scream the lyrics directly into each other’s faces.

Nope, the best bit of any night out is the bit before. Pre-drinks.

The Pope fucking loves a good pre-drink, and he always brings his favourite cup 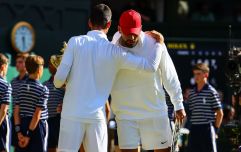 END_OF_DOCUMENT_TOKEN_TO_BE_REPLACED

Pre-drinks are a uni thing. You might have had a few pre-drinks in your friend’s lounge when you were 18 and still at school, but their parents kept popping in and out asking if anyone wanted pizza and one of you insisted on calling them “prinks”. They started for real on your first night of Freshers’. There you sat awkwardly around the table with a bunch of strangers, trying desperately to have what everyone kept telling you was “the best time of your life”.

It was probably slightly painful. You knew no one gave a fuck what school you went to, because you didn’t give a fuck about theirs either, but it’s the first day of uni, isn’t it, so that’s all you talk about, and you’ve got to make friends.

Then out came the cards and a single pint glass. Ring of Fire, actually, is a bit of a shit game, but at uni it’s a fucking lifesaver. Who needs small talk when you can shout “chug” at an 18-year-old you’ve never met before as he chews down a pint of milky, Guinnessy wine?

END_OF_DOCUMENT_TOKEN_TO_BE_REPLACED

I bet a lot of your best Freshers’ Week memories came not in the nightclubs, but in the kitchens – and this is only partly because they’re often the only bits you can actually remember.

The older you get, the less pre-drinks are about games that get you battered in less than 15 minutes and are more about just having a good time with mates. Pre-drinks are where the night is made. They’re like a house party, but without the random mates of mates who get dragged along, the initial two hours of everyone just waiting for more people to turn up, and with an end goal – a purpose.

The point of pre-drinks is to get everyone up for the night ahead, not in the “wheyyyy mate down this pint of vodka mixed with my wee” way you might have seen at certain uni sports socials, but in a “let’s sit around the table, get a bit pissed, and laugh about all the shit that happened the last time we all went out together” way.

Sam Allardyce knows the value of a good pint of wine

And that’s the thing with pre-drinks – the proof that they really are the best part of the night out – they always go on far longer than they should. The taxis are always pushed back and back until the plan to get to the club for 10 becomes the plan to leave the house at 11. Sometimes the taxis get forgotten completely and pre-drinks become all-night-drinks.

We should be calling the night out "post-drinks", because really, it's the pre-drinks that are the main event. They're the best part of any night out, so hold off on calling those cabs.

popular
Inbetweeners star Joe Thomas has been in a relationship with his co-star for over 10 years
Magnum P.I. star Roger E. Mosley dead at 83 following car crash
Runner finishes last in 400m race as penis keeps falling out of shorts
Massive piece of Elon Musk's spacecraft lands on farmer's property and could make him very rich
Tourists left 'squealing' as thousands of venomous crabs invade UK beach
Christina Ricci says Johnny Depp told her 'very matter of factly what homosexuality was' when she was 9
New heatwave this week will be longer than July's - and Brits told not to have barbecues
You may also like
News
Men under 40 shouldn't have more than a shot glass of beer per day, new study claims
News
Man dies after downing bottle of Jagermeister in under two minutes
Life
Platinum Jubilee: Brits to sink 712 million pints over weekend
News
Heavy drinkers are healthier and happier in later years, new study says
Entertainment
Love Island dream job: Here's how to get paid to watch the reality show
Next Page