That's it, we've decided never to use the toilet again.

A few years ago we saw a video in America where a snake slithered up into someone's toilet and greeted them in the morning when they opened the lid. 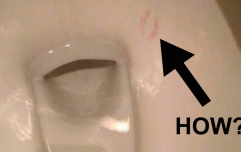 Five important questions about the toilet with lipstick marks inside it

END_OF_DOCUMENT_TOKEN_TO_BE_REPLACED

And ever since watching it, we've had an irrational fear of the same thing happening to us.

But it seems that it's not only snakes we should be worried about - with rats also posing a serious plumbing problem according to this nightmarish video.

Just look how easily he worms his way up this toilet - and now imagine, he can do it just as easily in your house...

popular
The JOE Friday Pub Quiz: Week 271
Ava White, 12, dies after Liverpool stabbing - four boys aged 13 to 15 arrested on suspicion of murder
Tobey Maguire Spider-Man spotted in No Way Home merchandise
Pro Volleyballer spends £590K believing he was dating supermodel Alessandra Ambrosio for 15 years
Over 200 kilos of cocaine with Liverpool FC branding seized
BT Sport release statement as Chris Sutton is denied access to Ibrox again
Oxford United call up women’s team midfielder due to injury crisis
You may also like
News
Hospital accidentally used toilet water for drinking for nearly 30 years
Fitness & Health
Doctor reveals painful risks of spending more than 10 minutes on the toilet
News
Fears of toilet roll shortages again as manufacturers warn of rising costs
Life
You've been wiping your arse wrong this whole time
Life
The sit-down wee is the best way to piss, and we should all be doing it more
Next Page