We can kind of see the misunderstanding here.

A mysterious group of bearded men who met on the internet, arrange to congregate at a deserted old castle wearing dark clothing and waving a big black flag with a white swords on it. 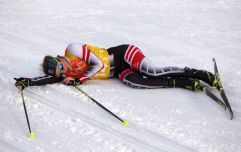 END_OF_DOCUMENT_TOKEN_TO_BE_REPLACED

Locals in Sweden were so perturbed by the gang of hirsute men travelling to the picturesque locality of Gränna for a meet-up, that they informed the country's counter-terrorism unit.

Yet when the police arrived to confront the group, they encountered a gang of hairy hipsters, rather than a cell of furry fundamentalists.

It was in fact the Swedish chapter of the 'Bearded Villains', a organisation that celebrates manly face fuzz.

They were meeting for a photo shoot at the local castle ruins. As organiser Andreas Fransson explained to the Independent:

"After about an hour the police showed up. They told us they got a call from someone driving past on the highway, saying that there were ISIS terrorists at the ruins.

"The police saw of course that we weren't terrorists, just very happy and nice bearded gentlemen. We had a laugh with the police and they left. It was a surreal experience."

So let that be a lesson - don't judge a book by its cover. Or a man by his beard.

popular
Bars announce plans to open at 12:01am on Monday
Maya Jama criticised for 'disrespectful' video outside Buckingham Palace
Big Brother star Nikki Grahame dies aged 38
The JOE Friday Pub Quiz: Week 238
Prince Philip refused return to hospital in days before his death
Phoebe Waller-Bridge to star as female lead in new Indiana Jones Film
Meghan Markle will not attend Prince Philip's funeral
You may also like
Sport
Zlatan Ibrahimovic recalled by Sweden, probably because he's a lion or God or something
Sport
Zlatan Ibrahimović to make sensational return to Sweden squad aged 39
Sport
Swedish side hit peak s***house by kicking extra ball onto pitch in last minute to stop attack
News
Why does Sweden have so many COVID-19 deaths?
Health
This is how to survive living in total isolation
Next Page