For some ungodly reason, Barack Obama has been on holiday with Richard Branson

You've just finished an eight-year stint in the biggest job in the world. So what do you do afterwards? 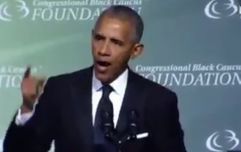 WATCH: Obama's return to the public stage kicks off with an absolutely brilliant opening line

END_OF_DOCUMENT_TOKEN_TO_BE_REPLACED

Former President Barack Obama and wife Michelle shot off from Washington (and who can blame them - have you seen the state of that place right now?) to go on vacation after Donald Trump took up residence in the White house.

The couple were spotted chilling out on Mosquito Island, with Barack sporting a most-presidential backwards baseball cap. But who's that sat next to him? 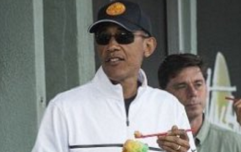 END_OF_DOCUMENT_TOKEN_TO_BE_REPLACED

It's former fizzy cola salesman Sir Richard Branson. It was a little surprising to see, but kind of makes sense when you know that Branson owns the island.

But the Obamas did more than hang out on the Virgin boss' private island. The former Leader of the Free World and the man responsible for some of the most overpriced trains in Britain went kitesurfing, as you can see in a video Branson posted to his Facebook page.

So there's a couple of things to note here. First, upon an initial viewing of the picture of Branson playfully strangling Obama, we thought it was the old woman from Titanic. Second, Obama batters Branson in a kitesurfing contest, which is immensely satisfying and really the only acceptable outcome. 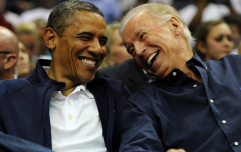 END_OF_DOCUMENT_TOKEN_TO_BE_REPLACED

Finally, what the hell is Obama doing hanging out with Richard Branson? Of all the people he could have chosen to spend his vacation with, he chose the man who signed the Sex Pistols. He could have given Jay Z a call, or maybe gone skiing in Aspen with his buddy Joe, but apparently Mr Virgin Megastores was the man.

Commenting on the video, Branson said:

"One of the first stories Barack told me when he and Michelle arrived on Moskito Island was how, just before he became President, he had been surfing on a dangerous break in Hawaii.

"When he came in from an exhilarating session, the new head of his security team turned to him and said: 'This will be the last time you surf for eight years.'

"For the next eight years he didn’t have the chance to surf, enjoy watersports or do many of the things he loved.

"So it was tremendous to offer him the chance to learn to kitesurf."

We're just glad Obama is having a nice time, because really, no one else is.

popular
Love Island extended tonight for ‘most dramatic and explosive Casa Amor ending' in show history
Dad who left partner for Ukrainian refugee is now her full-time carer after she became partially blind
Chelsea set to hijack Frenkie de Jong deal, offering two players plus cash
British Airways jet catches fire as passengers and crew are evacuated after flight from London
Premier League club faces call to suspend international player over rape allegations
Boris Johnson says he is 'so sad to give up the best job in the world'
‘Bye, bye Boris’ song playing in the background of PM’s resignation speech is the finale we all needed
You may also like
News
Michelle Obama 'not surprised' by Meghan Markle's claims of racism in the Royal Family
Television
Barack Obama reveals he loves The Boys
News
Obama, Bill Clinton and George Bush are all willing to get vaccinated on-camera
News
Barack Obama says he "screwed up" not giving Dolly Parton a Presidential Medal of Freedom
Entertainment
Barack Obama is happy for Drake to play him in a movie biopic
Next Page