The Chicken Connoisseur goes mainstream as he appears on ITV News

He's the hero 2016 needs, but not the one it deserves right now.

Unless you've been living under a rather large piece of breadcrumb-coated chicken breast for the last two weeks, you'll be aware of the culinary and cultural phenomenon that is the Chicken Connoisseur. 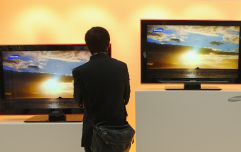 END_OF_DOCUMENT_TOKEN_TO_BE_REPLACED

In case you have been living under said giant chicken breast, the CC, aka Elijah Quashie, has blown up on social media because of his quiet hilarious and superb takeaway reviews on his YouTube show, The Pengest Munch.

But it seems the Connoisseur is destined for even bigger and better things than internet fame, as he only went and made an appearance on national television on Tuesday night. Not only that, but on the news too!

That's right - Quashie was a guest in the ITV News studio, and goodness knows what the befuddled national public made of the online sensation. That said, confusion over his real age (whether it matters or not) rumbles on.

Despite previously stating he's actually 23 on Twitter (this may have been a joke but the tweet has now been deleted), he wouldn't disclose the information on the news, saying it was now "confidential information".

However, the sneaky anchor then went on to ask him about his school days and the Connoisseur responded in the past tense, so it is safe to assume he is not 15-years-old as previously assumed.

He signed off with a gun sign at the end. Probably the first time they've witnessed that in the ITV newsroom...

popular
St James' Park to get new name under Newcastle new owners
How did Brian Laundrie’s parents find his remains in a few hours?
The JOE Friday Pub Quiz: Week 266
Taliban 'behead junior volleyball player and post photos of her head on social media', report says
Real life Squid Game coming to UK and you have to sign a 'medical disclosure' to play
Alec Baldwin asked 'why was I handed a loaded gun?' after fatal on-set shooting
Cold War Steve: How the Banksy of Twitter turned Covid angst into art
You may also like
Entertainment
The definitive list of movies and TV to see you through autumn
Entertainment
Matt Lucas hits back at outrage over 'offensive' Bake Off German accent
Entertainment
GMB fans shocked over Richard Madeley's 'inappropriate' Kate Middleton comment
Entertainment
Mindhunter director tells fans to 'make noise' to get season three made
Entertainment
Netflix employees 'planning walkout' over Dave Chappelle's new comedy special
Next Page