Another day, another brand getting in trouble for offensive marketing.

At this point we wonder how companies have not learned by now. Or perhaps it's all for the publicity.

Either way, people were not impressed by this recent ad campaign launched by men's clothing website Jacamo. 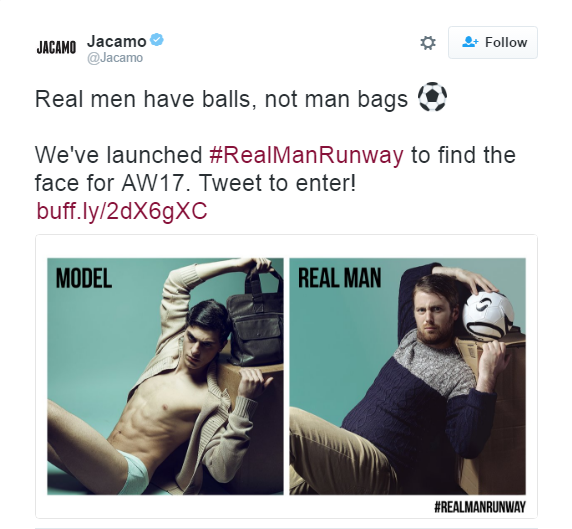 The caption reads: 'Real men have balls, not man bags' - a comment many people have taken to be homophobic.

Twitter users took huge offence with this campaign and pointed out several issues with the idea.

Someone is getting fired on Monday. Not enough characters to go into why this isn't acceptable @Jacamo idiots. https://t.co/7l4dpP4kza

Some people also pointed our some irony about the ad.

The clothing brand issued a statement about the Real Men campaign.

Speaking to The Gay UK a spokesperson for Jacamo said:

"Here at Jacamo championing male body and fashion diversity is really close to our hearts.

"We want to encourage all guys to feel confident – regardless of age, size, shape, colour or sexual orientation and that’s why we launched our Real Man Runway competition, to make more men feel represented on the high street and to celebrate the diversity of the UK’s men. Encouragingly we have loads of entries which are testament to this aim.

"Our social tweets were supposed to be a fun way of illustrating that there is more than one type of man something that the Real Man Runway competition is trying to do.

"We are mortified that this caused any offence and of course apologise."