You've got to love Eric Cantona...

He is one of our ultimate heroes here at JOE. When he's not condemning Michel Platini months before the rest of the world, he is vowing to take in refugees fleeing Syria.

Now the 49-year-old has posed with his wife Rachida Brakni on the cover of Elle magazine - completely stark b*llock naked.

In a subversion of the stereotypical template of a fully-clothed man posing with scantily-clad women - see NSFW images of Robin Thicke and Quentin Tarantino - Cantona is happy to reverse roles with his other half.

Actress Brakni is the one fully clothed, whilst her husband stands lovingly behind her with only careful positioning maintaining his modesty...

Although some may not appreciate an eyeful of Eric in the all-together, we admire his confidence and self-assurance. You can say may things about the man, but he's clearly not insecure about his masculinity. 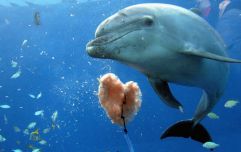 END_OF_DOCUMENT_TOKEN_TO_BE_REPLACED

The Man United legend is also snapped with his missus grabbing his arse in the magazine's feature on the couple. Again, it may not be to everyone's tastes but as ever, Cantona is unafraid and unabashed.

Footballer. Social commentator. Actor. Feminist icon? There is only one Eric Cantona...

popular
A definitive ranking of every swear word from worst to best
End of life 'suicide capsule' machine gets approval in Switzerland
TikTok 'time traveller' claims ‘humans’ lives will change forever on Christmas Day
Jimmy Carr slaps down anti-vaxxer in crowd with brutal one-line dig
Juan Cuadrado leads complaints over suspect goal in Colombian promotion clash
Arthur Labinjo-Hughes' stepmum 'spiked with salt in prison'
Arthur Labinjo-Hughes' dad to release body to family for funeral
You may also like
Sport
Rangers fans told not to travel to Lyon due to 'festival of light' taking place in city
News
Macron privately called Boris Johnson 'a clown', according to reports
News
Macron changes colour of French flag without telling public in 'political' decision
News
Foreign Secretary tells France to 'withdraw their threats immediately' or else the UK will 'take action'
News
Beauty pageant sued for 'selecting based on appearance'
Next Page