Children in Halifax, Canada have been joining in with a brilliant way of helping out their homeless community ahead as the cold winter begins to bite.

Local woman Tara Smith-Atkins reached out to people in the community asking for donations of coats. After using Facebook to launch her appeal, she received bags upon bags of warm clothing. 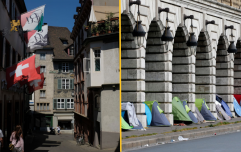 END_OF_DOCUMENT_TOKEN_TO_BE_REPLACED

Having been inundated, she decided she would ask her daughter and her seven friends to help her dress local lamp posts with the coats, scarves and gloves on a visit to the city on November 15.

Each bundle came complete with a tag which read: 'I am not lost! If you are out in the cold, please take me to keep warm!'

We live in a caring community! Great to see coats downtown for whoever might need one in this cold weather. pic.twitter.com/kRAvIlWdDV

"They definitely learned the importance of it," Smith-Atkins told CBC News.

"When we got back in the car after an hour on the street, they were all freezing and crying for the heater to be on and complaining because they were cold. And they were bundled up."

Photos of the lamp posts soon circulated, with many wondering who was responsible for the gesture.

popular
Prince Andrew 'flew with sex slave' who was 'frozen with fear', court told
Germany to announce nationwide lockdown for unvaccinated
Alec Baldwin claims he never actually shot gun on Rust set
Christian Eriksen is training alone at his former club
Harrowing video shows teen blasted in the face with shotgun - and survive
Elon Musk shares 'evidence' we are actually living in a simulation
Woman wins millions after suing mum's GP for allowing her to be born
You may also like
News
Robin Williams demanded producers hire homeless people if they wanted to work with him
News
More than 58,000 Palestinians left homeless by Israeli airstrikes in last week, UN confirms
News
Jaden Smith is opening restaurant where homeless can eat free vegan food
News
Homeless people moved up vaccine priority list
News
More than 70,000 households made homeless since start of coronavirus pandemic
Next Page