He said it is a 'wake up call' to livestock farmers

Burger King are currently trialling a vegan Whopper in 59 restaurants across St Louis, Arizona. The plant-based burger will obviously be met with derision from determined polemicist carnivores, just as the Gregg's vegan sausage roll was. Because apparently, people can't distinguish between a menu that serves everyone and political correctness. 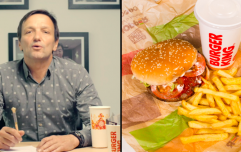 Burger King are offering somebody £20,000 to taste test their new burger

END_OF_DOCUMENT_TOKEN_TO_BE_REPLACED

But surprisingly, the 'Impossible Whopper' has been praised by the most unlikely of people: a meat lobbyist, who praised the product's likeness to real beef.

Reviewing the burger, Eric Bohl, director of public affairs at the Missouri Farm Bureau, wrote: “If farmers and ranchers think we can mock and dismiss these products as a passing fad, we’re kidding ourselves.

“This is not just another disgusting tofu burger that only a dedicated hippie could convince himself to eat.”

The vegan Whopper is made by California based company Impossible Foods, who have found a way of recreating the flavour of meat by using genetically modified yeast to produce heme, a protein which mimics the taste of real meat. Their burgers are also designed to 'bleed' as real beef would. This is not your regular meat substitute. 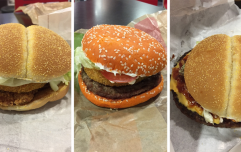 END_OF_DOCUMENT_TOKEN_TO_BE_REPLACED

Bohl admitted the difference in taste between the vegan Whopper and its meat-based counterpart was minor, saying the advance of meat substitutes pose a threat to the industry in which he has enjoyed huge success.

“If I didn’t know what I was eating, I would have no idea it was not beef,” he wrote. “Farmers and ranchers need to take notice and get ready to compete. I’ve tasted it with my own mouth, and this fake meat is ready for prime time.”

“This is an intense challenge to our industry and we must continue to fight,” he added in a follow up post.

Back in August, after livestock farmers complained of fake meat products made from tofu and soy being labelled as meat, the state of Missouri became the first to ban meat substitutes falsely branding themselves as meat.

In July 2017, the CEO of Impossible Foods said they want to eliminate all meat from human diets. Going by the response to this burger, they're on the right track.