Apparently it's not just women who fake orgasms, and men have all sorts of reasons

As men, we're living in constant fear of being so inadequate in the bedroom that our partner has to pretend she's having a good time.

Faking orgasm is an age-old technique employed by dissatisfied women who want to avoid any unnecessarily awkward pillow chat, but in fact,  it is thought that a quarter of all men are using exactly the same trick more often than you might think.

END_OF_DOCUMENT_TOKEN_TO_BE_REPLACED

The scientific journal Sexual and Relationship Therapy surveyed 203 Canadian and American men, aged 18 to 29, who admitted to faking orgasm at least once in a four-month relationship.

The participants claimed that in 30% of all sexual encounters, they'd put it on, and that was the case for all types of sexual activity.

But why? There are a multitude of reasons. Some of the men were perfectly happy in their relationships, and simply feigned to coincide with their partner's orgasm. They just wanted a mutual moment of hot, sexy loving. Fair enough.

There were also participants who faked because they wanted to feel sexy, and some just did it because they were so 'intoxicated' that a natural orgasm just wasn't on the cards.

In the case of some of the participants, the more they feigned orgasm, the more satisfied they felt in their in relationships. If their partner was happy, they were happy. 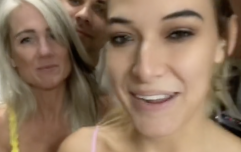 END_OF_DOCUMENT_TOKEN_TO_BE_REPLACED

But this wasn't the case for everyone. Some men confessed that they would fake because they weren't enjoying sex with their partner, and these participants were more likely to be dissatisfied in their relationships.

The study's authors said: "When orgasm is simulated because the sex is not satisfying, or because the partner is not desired, men can be encouraged to explore ways to enhance pleasure in sex, or to communicate with their partners about activities which they ﬁnd arousing and satisfying."

So basically, everyone's at risk at being the victim of a fake orgasm, regardless of their gender. It's all a bit depressing, but if you want the best possible chance of real-life steaminess between you and your partner, you should aim for 10:30pm on a Saturday night. Thank us later.