5 ways to win an eating competition...

After attempting the 'Chilli Challenge' at Meat Liquor in London, the JOE team somehow lived to tell the tale.

The daunting task consisted of eating a green chilli cheeseburger (with extra pickles), a chilli dog smothered in mustard, and a huge plate of chilli cheese fries... all in 10 minutes.

Anyway, here's what we learnt from the challenge so that you, dear reader, will hopefully find your next eating competition a hell of a lot easier than we did.

END_OF_DOCUMENT_TOKEN_TO_BE_REPLACED

You'll barely have any time to drink, but the lubrication water provides is essential. By the end the only way to get the food down was bite, chew, drink, while some members of the team even tried the tested 'dunking' technique - basically, pick up whatever it is that needs to be eaten, soak it in liquid and push it home. 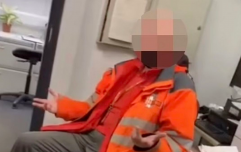 END_OF_DOCUMENT_TOKEN_TO_BE_REPLACED

When the waitress told us to focus on our breathing beforehand, we laughed and thought 'how hard can it be?'.

Within the first 30 seconds we were gasping for air between mouthfuls, drowning in a sea of meat and chilli. The better you regulate your breathing, the more chance you have of completing the mission.

Trust us, the experts swear by it.

3) Stay on your feet

Don't compress that belly by sitting hunched over the table - you need to open everything up, from your mouth right the way down to the pit of your stomach.

It's true, you'll look like an idiot standing up in the middle of a restaurant, but it's a price worth paying if you're a winner by the end of the night.

Don't hesitate to get stuck right in. One member of the JOE team began by using a knife and fork, but being polite only slows you down.

Just push the food in as quick as possible, because you're bound to slow down when you start getting full. Being a greedy b*stard is the aim of the game.

Never, ever give up hope in an eating competition. I was eight seconds from failure - still chewing burger meat and hot dog as the clock ticked down - but I got there.

Yes, I've seen things. Terrible things. And I don't ever want to go back to that place (the bad place, not Meat Liquor - that was lovely), but holding on to my belief pulled me through in the end *wipes tear from eye*.

If I can do it, then you can too my friend.