There are 400 stunt actors in the UK, only two of them are black women

Shaina West is a stunt actor living and working in the UK. It's a small field of 400 people but only two of them are black women. Yet, Shaina has still been overlooked for roles playing black women. 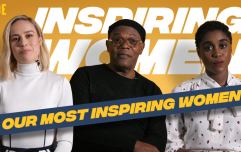 END_OF_DOCUMENT_TOKEN_TO_BE_REPLACED

In one instance, she describes losing a job to a man who wore a wig and darkened his skin for a part. The practice, known as "wigging," is common place. Most men involved in the profession have done it at some point.

In this interview, Shaina discusses motivations, moral duty and the importance of speaking truth to power.

"I feel if I don't put myself forward and push and achieve these things as a woman in a male-dominated space, I'm going to be letting more people down then just myself," Shaina says.

"My biggest goal is to be like the heroes that inspired me to be on the big screen in the first place. Black Panther 2, Avengers, any cool Marvel, DC superhero film released in the future, I want to be onscreen.

"I want to give a young girl or young boy, anyone, that feeling I first got when I saw Trinity in The Matrix."