In Russia, several cases of bird flu have been found in humans

Thankfully, it doesn't appear to be spreading between people

Russia has observed cases of H5N8 bird flu in humans for the first time.

Several workers at a poultry farm in the southern part of the country were found to have contracted this particular avian influenza virus.

These cases were confirmed by Russia's leading public health official, Anna Popova. Popova has been the Chief State Sanitary Doctor of the Russian Federation since 2013.

In a press briefing televised on Saturday, Popova said information surrounding the cases of bird flu has been sent to the World Health Organisation (WHO).

"It is not transmitted from person to person. But only time will tell how soon future mutations will allow it to overcome this barrier."

She added that the discovery of positive cases "gives us all, the whole world, time to prepare for possible mutations and the possibility to react in a timely way and develop test systems and vaccines."

Those who contracted the virus displayed very mild symptoms, and are all said to have recovered.

The WHO say just six people have died from avian influenza since 2014. These six fatalities were confirmed cases of H5N6, of which there were 14 cases in total. 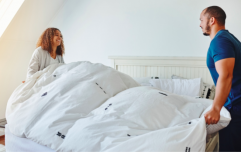 Making your bed is actually bad for you, doctor claims

END_OF_DOCUMENT_TOKEN_TO_BE_REPLACED

According to a team of German researchers, it is all to do with hemagglutinin - a type of protein found on the surface of viruses.

One of those researchers, Boris Bogdanow, said in 2019 that this substance has a "slightly different chemical structure" in humans compared to birds. This makes it "more difficult for an avian influenza virus to infiltrate a human cell than a bird's cell".

This protein is a "prerequisite for building new viruses", according to ScienceDaily.

This partly explains why cases of bird flu have generally only been observed in people with very close contact to poultry.

According to the NHS, bird flu spreads through three main mechanisms:

Cases of H5N8 avian influenza have been discovered in birds in the UK, but not in humans.