Yarmolenko asks Coke and Heineken for sponsorship at press conference

"Coke and Heineken, please get in touch."

Ukraine winger Andriy Yarmolenko has poked fun at the likes of Cristiano Ronaldo by moving Coca-Cola bottles into the camera shot at his press conference on Thursday, before asking Coca-Cola and Heineken for sponsorship. 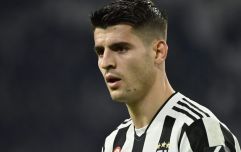 END_OF_DOCUMENT_TOKEN_TO_BE_REPLACED

Ronaldo made headlines earlier in the tournament after removing bottles of Coke from his press conference table and replacing them with water. This was then followed by France midfielder Paul Pogba moving a bottle of Heineken off his table the following day, and Italy star Manuel Locatelli removing a Coca-Cola bottle from his table before talking to the press on Wednesday.

Yarmolenko took a slightly different approach though, moving the bottles further into the camera shot and jokingly asking for sponsorship.

The West Ham player said: "Can I do something? I saw Ronaldo doing this.

"Coke and Heineken, please get in touch."

Yarmolenko has joined in on the Coca Cola & Heineken bottle banter

He’s down for some new sponsorship deals

‘I’mma put Coca Cola and Heineken together on the table - do get in touch with me, fellas’

Yarmolenko isn't the first player to provide a humorous take on the Coke controversy. When Scotland's John McGinn arrived at his press conference there was only water on the table, so he sat down and said: "Nae Coke?"

You can't beat the Scottish wit.

The bottle controversy had threatened to get a bit out of hand. Ronaldo's gesture wiped billions off the value of Coca-Cola, whilst UEFA have now said that players could face fines if they continue to act against the product placement at press conferences.