Both are ok, thankfully

Video shows Danny Ings and Kieran Trippier colliding with each other while training for England on Monday.

Whilst doing what looks like a routine training drill, the Southampton striker and the Atlético Madrid right-back both ran directly into each other, and appeared to clash heads.

They then fell to the ground, clutching their heads, while other players and coaching staff came to their aid.

Thankfully, Sky Sports reports that both Danny Ings and Kieran Trippier are ok, and fit for Tuesday night's Nations League clash with Denmark.

It was a lucky escape for Danny Ings as many predict he may receive his first England start due to the absence of Manchester United's Mason Greenwood.

Mason Greenwood and Phil Foden will not travel to Denmark after they broke UEFA's coronavirus protocols while in Reykjavik for England's tie Iceland last weekend. 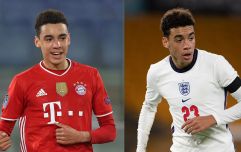 Jamal Musiala confirms he will represent Germany, not England

END_OF_DOCUMENT_TOKEN_TO_BE_REPLACED

Danny Ings came on for Greenwood in the 68th minute, in just his second appearance for his country. Now, with Greenwood set not to feature, he could be hoping for his first start.

Both Mason Greenwood and Phil Foden has since issued apologies for their actions.

England beat Iceland 1-0 in a laboured victory in Reykjavik on Saturday. Harry Kane had a seemingly fine goal disallowed early on, and little excitement followed for most of the game.

There was drama late on, however, when Raheem Sterling converted a penalty in the 89th minute after his shot was handled by defender Sverrir Ingason in the box.

Gareth Southgate's men almost managed to throw away two points though, as in injury time Joe Gomez conceded a penalty at the other end - only for Birkir Bjarnason to sky the ball way over Jordan Pickford's crossbar.

England had already been reduced to ten men after Kyle Walker was dismissed for a second bookable offence.