It's time to play the game

WWE Legend Triple H has said he doesn't mind Arsenal coming out to entrance music - as long as they don't lose.

END_OF_DOCUMENT_TOKEN_TO_BE_REPLACED

In July, fans watching at home spotted that Arsenal were coming to Triple H's entrance music.

"What better thing for Arsenal to have blaring over a loud-speaker system than Lemmy of Motorhead screaming 'Time to play the game'? There's nothing better than that," replied Triple H when asked about the song being played at the Emirates

He's happy with it - as long as #AFC keep winning.... pic.twitter.com/FkoLBwldvN 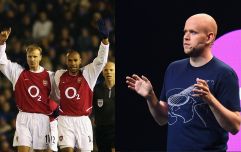 END_OF_DOCUMENT_TOKEN_TO_BE_REPLACED

Motorhead have often been cited as one of Triple H's favourite bands, and The Game got the British heavy metal icons to record several entrance themes for over the years before lead singer Lemmy Kilmister death in 2015.

The band even played Triple H to the ring twice at Wrestlemania, in 2001 and again in 2005.

This isn't the first time a Premier League team has caused a stir over a WWE wrester's entrance theme.

In 2013, current NXT tag champ Fandango became involved in a Twitter spat with Everton after they refused to play his music at Goodison.

To those WWE wrestling fans who've requested Fandango's theme for tomorrow, we won't be playing it at Goodison. #efcmusic #efc

@WWEFandango Mr Fandango. We've a rich history. We'd be happy to welcome you to Goodison to tell you more & maybe even play your theme song.

@WWEFandango We won't be playing it tomorrow, other than in our FanZone. Our offer to educate you about our great history stands though.

@WWEFandango We're sure you know the answer to that question. Nice try though.

It all ended amicably however, as they relented and did play his theme music. And Fandango did also take up the offer to visit Goodison in 2014 when he was in the UK.

popular
Jamaica teammates produce hilariously frosty reaction to Thompson-Herah's 100m win
A definitive ranking of every swear word from worst to best
Here's how to see who's been taking screenshots of your Instagram Stories
Mourad Aliev was not happy about being disqualified from the men's Olympic boxing
The Chase has responded to viewers convinced the show was rigged to avoid paying jackpot
Johnny Depp secures rare win over Amber Heard’s $7m divorce settlement pledge
Doctor says never take paracetamol to treat a hangover and reveals what to take instead
You may also like
Sport
Mikel Arteta delivers message to Arsenal fans ahead of protest
Sport
The humiliation of the arrogant Super League is a moment we should all savour
Sport
Everton release powerful statement on Super League 'abomination'
Sport
Super League: Ensuring failure isn't an option for the cowardly cabal
News
Man Utd and Arsenal step down from European Club Association
Next Page