The 2019/20 Premier League season is only three weeks away. Without regular Prem action, the country has descended beyond even the endless farce it was originally. Boris Johnson is prime minister. Jacob Rees-Mogg is the leader of the House of Commons. England now has roughly the same climate as the Republic of Djibouti. What the fuck is going on.

So, just to take our collective minds off the political and environmental horrorshow that is slowly devouring the earth and everything in it, let's make some outlandish predictions for the Barclays, the opiate for the masses, the sweet, sweet, eternal bliss that is English top-flight football. Oh, and please do feel free to take this list so seriously that you end up bashing away at your little phone with your chubby irate little fingers telling FootballJOE to fire me. They're not going to fire me. (I don't think they are going to fire me).

1. Wilfried Zaha starts the season with Angry Birds on his sleeve

Sorry Reuben Pinder, but the Wilfried Zaha to Everton rumour that has been going around thanks to Sky Sports' yellow-tied transfer deadline die conductor Mr. Jim White, is so batshit crazy that there has to be some semblance of truth to it. You simply do not pluck this rumour out of thin air. It's Everton. Everton. They are absolutely 100% buying Wilfried Zaha for £80 million and still finishing 8th next season. That is their destiny.

As it is for every single Crystal Palace fan to get their hearts smashed into a trillion little pieces by Wilf, who decides to leave them to for a football team whose current first-team strikers are Cenk Tosun, Oumar Niasse and Dominic Calvert-Lewin. You hate to see it.

But hey, Palace fans, it isn't all bad! At least you've got Jordan Ayew locked up for another three seasons!

✍️ Jordan Ayew has joined Palace on a three-year deal.

2. Two of the newly promoted sides stay up

I'm leaning towards Norwich City and Aston Villa here more than Sheffield United but after witnessing the driveby shooting Blades Twitter pulled on one of my colleagues this week, after he suggested signing a 3 goals in 58 appearances striker for a club-record fee might not be the best bit of business in the entire world, then I'm not going to officially rule them out of staying up just yet.

Although that being said, they have just signed a 3 goals in 58 appearances striker for a club-record fee.

The reason I think Aston 'tHeY'rE dOiNg A fUlHaM' Villa and Norwich can stay up is pretty much just because there are a lot of bad teams doggy paddling about in the lower reaches of the table. Brighton have the weirdest jumble of a squad you've ever seen and surely cannot keep relying on a 35-year-old forward who looks like a carpenter to keep them afloat. Newcastle have literally swapped a Champions League-winning manager for one who wrote a book called STRIKER!. And another one called SWEEPER! And another one called DEFENDER!. Burnley's best player is... Ashley Barnes??? Do you see what I mean?????? Do you see where I am coming from???????? 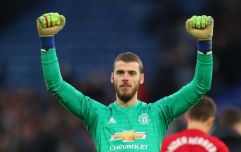 The Premier League is coming back on June 17th

END_OF_DOCUMENT_TOKEN_TO_BE_REPLACED

Jack Grealish gets fouled more than any player I have ever seen. In the Championship last season, Grealish got fouled, on average, 4.7 times per game according to WhoScored, equating to 160 fouls against him during his 34 appearances. To put that into perspective, the Premier League's most fouled player, Eden Hazard, was hacked down on average 2.8 times per game, 104 times in total.

Given that Grealish has now started wearing a headband in pre-season and the Premier League contains the following (incomplete) list of central midfield cloggers: Dale Stephens, James McArthur, Oriol Romeu, Tiemoue Bakayoko and Morgan Schneiderlin, it is not impossible to see Grealish get fouled roughly every time he touches the ball. Which is a lot. It is a fucking lot, basically. My guess is Jack Grealish gets fouled at least 200 times next season, presumably shattering the previous Premier League record, which I can't find on the internet anywhere. Sorry.

The following things are true: Wolves have a very strong starting XI that all know how to play with each other, an effective brand of football and a Champions League calibre manager in Nuno Espirito Santo.


The following things are also true: they are playing Crusaders tonight in the 2nd qualifying round of the Europa League, they will play them again next week, they will likely play in the 3rd qualifying round the week after that, and then the Premier League season will start. They have 19 players in their first-team squad. Outside of Diogo Jota and Raul Jimenez, their starting forwards, they have no cover upfront. No Leo Bonatini doesn't count. No, Adama Traore can't play anywhere that isn't glued to the right touchline. They have no backup option for Matt Doherty. They are ridiculously light on the ground in terms of squad depth outside of centre back and centre midfield. 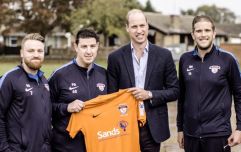 The football club helping men grieve the loss of a child

END_OF_DOCUMENT_TOKEN_TO_BE_REPLACED

What I'm saying is they are one Doherty ACL injury away from playing Traore as a right wing-back, conceding four goals a game from attacks down that side because he is stood by the opposite corner flag with his hands on his hips and barely finishing above the relegation places. IF they don't buy a few players between now and the end of the window. IF.

I know. Stop shaking your head. Take a second to think about it. Nobody thought Brighton would part ways with Chris Hughton. Burnley's last three Prem finishes: 15th, 7th, 16th. That 7th place finish meant qualification to the Europa League and that hard-earned, illustrious campaign also meant: failing to even reach the group stages. During the period between October and Boxing Day last season Burnley went on the following run: 1W, 2D, 9L. They scored eight goals in those 12 matches and conceded 30.

Now, are you telling me that it is unfeasible that Burnley go on a similar kind of barren stretch this season and finally take him out the back and pull the trigger on their tired old warhorse? Are you telling me that Dyche, with his voice like Kermit the Frog chewing gravel, hasn't done all he can possibly do with this Burnley side? They have literally no good young talent outside of Dwight McNeil. Outside of their two goalkeepers that aren't Joe Hart who are obviously quite good, the rest of their squad is either a) a 27 to 34-year-old Championship player or b) James Tarkowski.

Mark my words, Burnley are going to be garbage this season but because Dyche has been performing minor miracles this whole time just to keep them competitive in the league, they will think they can do better. And they will sack him and immediately realise that, no, they can't, and that will be the last we ever hear of Burnley Football Club.

Scroll back up to the top of the article and read the headline again, please. Note the word outlandish. Thank you. Now fucking calm down will you. Think outside the box for once in your small, insignificant life. Obviously this isn't happening but I think you can make a strong case for it.

West Ham are managed by Manuel Pellegrini. They have managed to keep hold of all of their best players bar Marko Arnautovic, who was something of a disruption in the dressing room anyway (Diop, Balbuena, Rice, Felipe Anderson). They have added two exceptional players in Pablo Fornals and Sebastien Haller that immediately make their team loads better. They also have two really good players (Andriy Yarmolenko and Manuel Lanzini) who barely featured last year and have returned from injury. Honestly. All West Ham need to do to challenge for the top four is not play Carlos Sanchez and not be West Ham. That's it. That is all that's stopping them. Oh god I think I've actually talked myself into it. I actually think it might happen.

This one, I'm afraid to say, isn't even slightly outlandish. Schär finished last season as Newcastle's third-highest scorer in the league, bagging an impressive four goals in 22 appearances. The two players that finished above him, Solomon Rondon and Ayoze Perez, have both been sold. Their replacement, Joelinton, who cost £40 million, scored seven goals in the Bundesliga last season. His best-ever return was eight. And that was in Austria.

The main factor, though, is that Newcastle United now employ Steve Bruce as their manager, as sure a sign as any that they won't be playing good football and won't be scoring much, anyway. Fabian Schär, the prestigious Golden Lonsdale award for Newcastle's top scorer is all yours, if you want it enough. All you need to do is score a few headers and take penalty duties off Jonjo Shelvey.


popular
QUIZ: How well do you know The Lord of The Rings movie saga?
All remaining Premier League games will be televised
QUIZ: Identify the brand from just its slogan
QUIZ: Name the 9 players to score for six or more Premier League clubs
Police confirm Dominic Cummings breached lockdown regulations with Durham drive
The JOE Friday Pub Quiz: Week 192
QUIZ: Can you guess the Leonardo DiCaprio movie from a single image?

You may also like
Sport
Liverpool vs Atletico Madrid caused spike in Covid-19 deaths
Sport
QUIZ: Name the 9 players to score for six or more Premier League clubs
Sport
Red Card Soccer: The most brutal football game ever made
Sport
The best and worst footballer TV adverts
Sport
The awkward art of the post-match interview
Next Page