Former England, Crystal Palace and Everton manager Sam Allardyce has said that the Premier League referees should be 'embarrassed' for their double standards regarding manager celebrations.

END_OF_DOCUMENT_TOKEN_TO_BE_REPLACED

Santo was sent to the stands and will more than likely face disciplinary action from the FA on Monday, however, Liverpool manager Jurgen Klopp and Manchester City boss Pep Guardiola both escaped dismissals following their side's respective wins over Everton and Southampton.

"The Premier League referees, it's just embarrassing isn't it," Allardyce said on Goals on Sunday.

"You've got your technical area and you're not supposed to go out of it. You're constantly reminded by the fourth official not to go out of it - 'Sam, Sam get back in your box' - the referee is not upholding the same regulations to certain managers for me on a consistent basis so it seems to depend on who you are, let's put it that way. 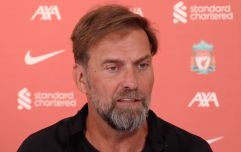 END_OF_DOCUMENT_TOKEN_TO_BE_REPLACED

Klopp subsequently accepted a Football Association charge for his celebration against Everton and was fined £8,000, claiming: "That's what rules are for. I couldn't avoid it."

Meanwhile Guardiola escaped both an in-game dismissal and a fine after coming onto the pitch to celebrate his side's injury-time winner over Southampton last season.