Eyes to the skies Gareth!

Some England fans have been trying to give the England players and staff some crucial last-minute tactical insight and analysis the day before they kick off their European Championships campaign against Croatia at Wembley.

END_OF_DOCUMENT_TOKEN_TO_BE_REPLACED

Before the players came out for training on Saturday morning, a plane was circling over the St George's Park training ground with a banner reading "MOST CROATIA GOALS COME DOWN THE LEFT."

Football journalist Faye Carruthers tweeted: "Waiting for @england to come out for training - plane flying over St George's Park with a banner reading "MOST  CROATIA GOALS COME DOWN THE LEFT" #ThreeLions #EURO2020"

Waiting for @england to come out for training - plane flying over St George’s Park with a banner reading “MOST CROATIA GOALS COME DOWN THE LEFT” #ThreeLions #EURO2020 pic.twitter.com/8gpNrnyN2p

It's true as well. Nine of Croatia's 17 goals in qualifying for the Euro 2020 originated from the left-hand side apparently.

It's a good job we've got so many right backs then.

It wasn't long before the players clocked the plane either.

Players out now noticing the plane for the first time as it comes back round ✈️ 🏴󠁧󠁢󠁥󠁮󠁧󠁿 #ThreeLions #Euro2020 @5liveSport pic.twitter.com/71svNzuShY 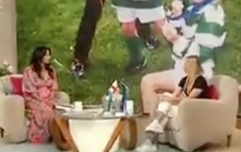 END_OF_DOCUMENT_TOKEN_TO_BE_REPLACED

You'd like to think that at this point Southgate and his merry men may have come up with some slightly more in depth tactical insight, but you never know. Gareth may be redrawing his gameplans as we speak after this crucial intervention from some fans.

Of course, this is the world that he now inhabits. Everyone watching at home, every pundit on TV, every journalist in the papers will have their own opinions and probably believe that they could do a better job or know more than him. This is the life of an England manager.

Stay strong Gareth, believe in your gameplan. Just make sure you keep an eye on that left flank will you....

It's not the only plane-based tactical advice from the day either. A plane flew over the Netherland's training ground encouraging the side to play a 4-3-3 formation, in protest against manager Frank de Boer's 5-3-2 tactics.

Football fans hey, you've got to love them.

popular
Robin Williams' wife shares reason why he killed himself
‘Time traveller from 2090’ warns humans of worst event in history in coming days
Antonio Conte 'banishes' four Tottenham players from first-team
Tory leader in shambolic BBC interview saved by even more embarrassing sign on his bookshelf
Groom shocks wedding by playing video of his bride cheating with her brother-in-law
University slammed for allowing 'PhD in Masturbation'
Two British men raped in Spain after being 'drugged while out on night out'
You may also like
Sport
Ellen White was banned from playing football aged nine, old article reveals
Sport
David Baddiel says it's time to retire 'Three Lions' after England's Euro 2022 win
Sport
Sarina Wiegman explains why she kissed bracelet during Euro 2022 Final
News
Queen Elizabeth II congratulates England Women on Euro 2022 triumph
Sport
Alex Scott and Ian Wright call out those 'not brave enough' to back women's football
Next Page