Who should play Paul Gascoigne in the film of his life?

Earlier this week it was announced that a film is in production based on Paul Gascoigne‘s memoir Gazza: My Story, and that the search has begun for an actor to take the lead role.

It is not an easy task. Paul Gascoigne was a once-in-a-lifetime figure. Not only was he maybe the most naturally talented English footballer of all time, but he is also a massively oversized character, with a unique energy and charisma. Not only that, but he is a deeply flawed human being, who has sadly gone through a lot of tragedy in his life.

So, any actor taking up the role has to not only capture Gazza’s very specific magnetism, but also portray one of the most recognisable sportsmen of his generation, and have the acting chops to handle some rather dark scenes. Plus, on top of that, he also has to be convincing as a professional footballer – because we all know there plenty of football films ruined by casting big-name actors who look like they’ve never kicked a ball.

Who do we think should be in the running then?

Have a search on social media for who people want to play Paul Gascoigne, and Jack O’Connell is one of the first names to come up. And it’s a good choice.


The 30-year-old actor made his film debut in This Is England, but he really made a name for himself as Cook in Skins. After brilliant performances in indie hits like prison drama Starred Up and Irish Troubles thriller ’71, he looked set to become a Hollywood star by taking the lead role in Angelina Jolie’s Unbreakable. That film didn’t quite connect though, and since then he’s not quite captured the same moment (though he was good in Netflix’s Godless) 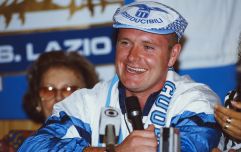 END_OF_DOCUMENT_TOKEN_TO_BE_REPLACED

A high-profile like Paul Gascoigne would be exactly what he needs, and to be honest, he seems like the perfect choice. He’s got a similar livewire vibe to a young Gascoigne, and a working-class honesty that he brings to all his roles. Not only that, he actually had trials for Derby County when he was younger, so they won’t need too many doubles for the on-pitch scenes.

Plus it wouldn’t even be the first time he played a footballer – he also portrayed Bobby Charlton in the TV movie United.

Another name that keeps popping up is Taron Egerton, best known from the Kingsman movies. Egerton is definitely a great young actor – many said he should have been Oscar-nominated for playing Elton John in Rocketman last year. But compared to O’Connell, he just doesn’t have that grit, for what will essentially be the story of a troubled kid from Gateshead.

Even in Kingsman, where he is supposed to be a kid from a rough background, it all feels a little fake (tbf those films are hardly realistic anyway). It just seems like a biopic of Gazza starring Taron Egerton would be that bit too glossy and Hollywood. 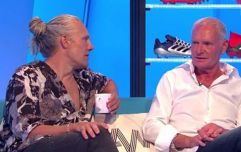 END_OF_DOCUMENT_TOKEN_TO_BE_REPLACED

George McKay has been acting since 2003, but only really became a big name after starring in last year’s thrilling WWI showstopper 1971. He certainly proved he can handle a physically demanding role in that film, but he doesn’t seem to have that indefinable ‘look’ of a professional footballer. Not a terrible choice, though.

Full disclosure: Joey Batey is only someone I came across by searching for young actors from Tyne & Wear. His breakthrough role came last year as Jaskier, the travelling bard in Netflix’s The Witcher. He’s a bit of a dark horse choice, sure, but in The Witcher he certainly displays the same clownish energy that Paul Gascoigne had at his peak.

OK, it is so hard to envision Thomas Turgoose as anyone other than Shaun from This Is England. But think about it. It could work.

Everyone from James McAvoy to Tom Hardy to actual Geordie Charlie Hunnam has been mentioned online. But they are all far too old.

The movie needs to focus on the big iconic footballing moments – Italia 90, Euro 96, his time in Italy, and maybe his hijinks at Rangers. Sure, it should, and probably will, cover the dark periods that came after he finished playing, but the last thing we want is some famous forty-something recreating 29-year-old Paul Gascoigne celebrating against Scotland.


popular
Michaël Cuisance to Leeds United has fallen through, reports claim
CBBC star Archie Lyndhurst has died aged 19
QUIZ: Can you guess the TV show from the kitchen?
Beyond The Mat remains the greatest wrestling documentary of all time
Henry Cavill speaks out on Enola Holmes copyright lawsuit
QUIZ: Match the quote to the It's Always Sunny in Philadelphia character #2
An ode to Juan Mata and what might have been

You may also like
News
Paul Gascoigne charged with sexual assault during train journey
Sport
World Cup Comments: An Ode To A Semi-Final
Sport
Why Italia 90 was the best World Cup ever
Sport
WATCH: Paul Gascoigne performed the Fortnite dance at Wembley today
Entertainment
Paul Gascoigne thinks he should replace Ant on Saturday Night Takeaway
Next Page