Oh, Harry Redknapp. The game is less colourful for your absence. Sure you may sent Portsmouth hurtling to the fourth tier and left QPR with a £42 million FFP fine.

END_OF_DOCUMENT_TOKEN_TO_BE_REPLACED

But we’ll always have you getting hit in the face by a stray training ground ball. You hanging out of the car window on deadline day. Denying that you are a wheeler dealer. You are clearly still gagging for one last job.

In 2008, Harry Redknapp signed Jermain Defoe for Portsmouth from Tottenham. It would only be short stay – Defoe would follow Redknapp back to North London just a year later.

In typical Harry fashion, his move to the South Coast was rushed through at the last minute. The now-Bournemouth striker spoke about the transfer at a press conference, and revealed the more Harry Redknapp-ever detail about the move. 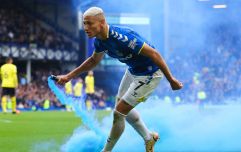 END_OF_DOCUMENT_TOKEN_TO_BE_REPLACED

“I was at my mum’s house, and I had to rush to Portsmouth.

“Because he knew me when I was a kid, so he just said ‘ Come on JD, you just gotta get down and score goals, you don’t need a medical. You’re young, you’re fit’.”

Jermain Defoe recalls the story of signing for Portsmouth under Harry Redknapp.