McClean is set to finalise a move to the Championship club after three-years with West Brom.

The Republic of Ireland winger has been linked with a move to Stoke for the past few weeks. Gary Rowett, the new Stoke manager, is seemingly a fan of McClean and attempted to sign him for Derby County back in January.

Stoke City can confirm that James McClean has today undergone a medical at Clayton Wood and expect to complete his signing over the weekend.#SCFC 🔴⚪️ pic.twitter.com/EYv2IoBc9T

The former Sunderland winger reportedly refused to attend a training camp with West Brom earlier this month as progress on his move to Stoke stalled.


The Baggies, who suffered relegation from the Premier League last season alongside Stoke, said McClean would "face internal disciplinary proceedings." But it doesn't look like he'll be a West Brom player for much longer.

It seems that the announcement of James McClean is imminent after @StokeLoudProud picture him at Clayton Wood. #SCFC #TBPTV pic.twitter.com/UkX37ZJXXX 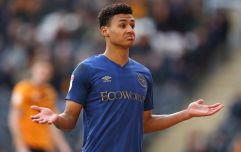 END_OF_DOCUMENT_TOKEN_TO_BE_REPLACED

McClean joined West Brom from Wigan Athletic in 2015 and has made 111 appearances for the club, scoring five goals.

Stoke are also reportedly close to signing James Chester from Aston Villa, and Tom Ince from Huddersfield Town as they plot a return to the Premier League.


popular
The JOE Friday Pub Quiz: Week 203
Fan fury over missing name from Premier League Manager of the Season nominations
I'm A Celebrity relocates to the UK because of COVID
59% of Brits do not consider a Magnum to be an ice lolly, extremely controversial YouGov survey finds
England could lose several promising youngsters to Jamaica
England Rugby scrap sevens team due to impact of COVID-19
FBI swat team raids the home of controversial YouTuber Jake Paul