He has had enough

James McClean has tweeted a message to the English Football Association after he was abused by Queens Park Rangers' supporters on Saturday.

A video emerged on social media of the Stoke City winger getting abused during the Championship game at Loftus Road.

McClean stood at the side of the pitch looking perplexed as some supporters screamed and cursed at him.

James McClean being abused by QPR fans today. 'They have nothing in their whole imperial arsenal that can break the spirit of one Irishman who doesn't want to be broken.' @JamesMcC_14 #coybig 👊🏽🇮🇪🇮🇪🇮🇪 pic.twitter.com/4nkpkWKeZX

QPR condemned the fans who abused the Republic of Ireland international on Saturday and said they are seeking to identify those involved.

McClean has since responded to the video on Twitter and sent a message to the FA.

"I am going to just start giving abusing back in whatever form I like and you’ll do nothing, just like you’s are doing everytime this occurs, otherwise that 'for all' on your logo would look very hypocritical and stupid, thanks hi." 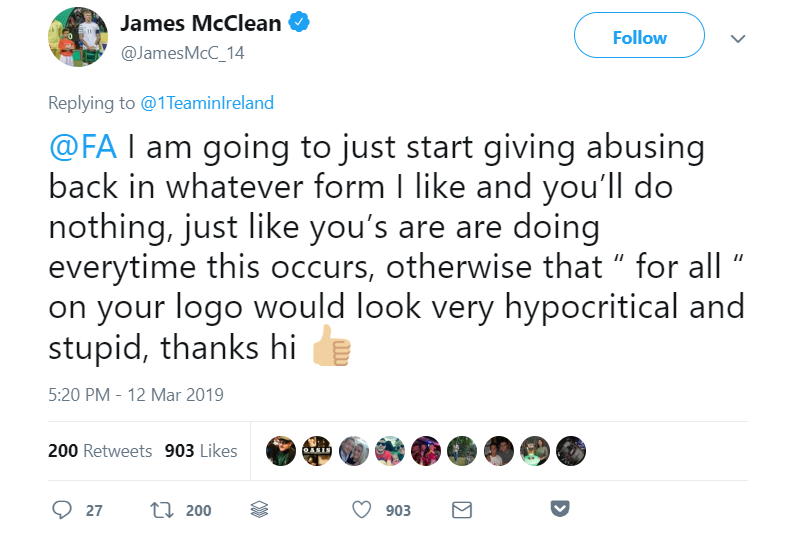 END_OF_DOCUMENT_TOKEN_TO_BE_REPLACED

McClean has been targeted throughout his time in English football due to his decision to not wear the Remembrance Day poppy.

Last November, he hit out that "uneducated cavemen" who abused him during a game with Middlesbrough and thanked those who supported his stance.

popular
Brit on holiday beaten with a brick by gang before being thrown in the sea unconscious
Dad who ran off with Ukrainian refugee says couple are doing 'brilliantly' - but he can't see his kids
Teens are turning up to watch Minions in suits - and why cinemas have been forced to ban them
Men with ‘very large penises’ wanted for new documentary
Premier League player arrested on suspicion of rape facing two more allegations
British schoolboy breaks internet after attending prom in sequined tuxedo ballgown
Conspiracy theorists believe the world will end today - here's why
You may also like
News
West Brom fan who racially abused Romaine Sawyers sentenced to eight weeks in prison
Sport
Tony Pulis was "like he'd won lottery five times" when he discovered Rory Delap's throw
Sport
James McClean shares image of threats sent to him on Instagram
Sport
His time at Barca is over, now it's time for Messi to do the noble thing
Sport
In tribute to Peter Crouch, a daddy long legs in ballet shoes
Next Page