Footballing history won't look upon Thierry Henry's short time in charge of Monaco very fondly and more information has come out as to why it didn't work out for the Frenchman in the principality.

The club board had naturally grown anxious about the coach's record in the dugout - tallying just four wins, five draws and 11 defeats in 20 games - but his relationship with the dressing room prompted them to abandon their plan of giving him the games against Dijon and Guingamp to turn things around.

This comes according to a Goal France report, where an insider claims that Henry continually made examples out of players he disliked, in particular decrying one as "supposed to be worth €10 million?" following a mistake that his substitutes heard and left a bad impression.

"He would speak badly to the players, it is a fact," notes the report.

"He would also make examples of people and that annoyed a lot of people, he gave this haughty impression as if he would not consider anyone else’s opinion." 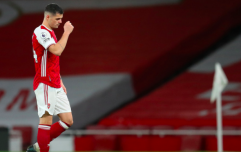 END_OF_DOCUMENT_TOKEN_TO_BE_REPLACED

Henry also reportedly upset many of the established figures in the dressing room when picking Youri Tielemans as his captain for the Coupe de la Ligue game with Rennes on January 9.

In the absence of regular captain Radamel Falcao, the usual routine was to hand the armband to experienced defender Kamil Glik, whose snub was seen as part of the boss' favouritism towards young midfielder Tielemans.

Suspended from his duties on Thursday after 104 days in the role, Henry hadn't guided Monaco to a win in the league since December 4 and lost 5-1 at home to Strasbourg last time out.

"We need guys who want to save the club, who don’t think about themselves," he had stated before being sacked. "We are going to war."

popular
TOWIE star Mark Wright is officially the worst player on FIFA 21
'That Vegan Teacher' banned from TikTok after 20,000 people sign petition to remove her
Princess Anne: Harry and Meghan were right to quit royal duties
Ex-Atalanta and Ivory Coast player Willy Braciano Ta Bi dies aged 21
WATCH: Dele Alli shows he's still got it with stunning bicycle kick
UK daily coronavirus deaths fall by half in past two weeks
A definitive ranking of every swear word from worst to best
You may also like
Sport
Paul Ince outdoes himself with ridiculous Arsenal statue gaff
Sport
Thierry Henry set for Barcelona return if Roberto Martinez is appointed
Sport
Thierry Henry was the third best paid manager in the world this season
Sport
Arsene Wenger backs Thierry Henry to succeed as a manager despite Monaco sacking
Sport
Thierry Henry 'suspended from his duties' as AS Monaco manager
Next Page