Players want to continue to take the knee before matches commence

Footballers "overwhelmingly support" taking the knee to highlight racial injustice before kick off, according to the Professional Footballers' Association. 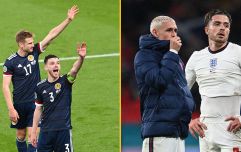 END_OF_DOCUMENT_TOKEN_TO_BE_REPLACED

The union asked its members if it wanted to continue with the gesture after a small minority of fans booed after being allowed back in to stadiums, notably at the home grounds of Championship team Millwall and League Two side Colchester United.

A questionnaire was sent to all of the PFA's members, asking five questions:

"The results were clear," said the PFA.

"Players overwhelmingly support continuing this act of solidarity despite any adverse responses that may be received."

The results showed that 80% of players 'support continuing this act of solidarity despite any adverse responses that may be received'.

The FA released a statement confirming that no formal action will be taken against the booing Millwall and Colchester fans.

END_OF_DOCUMENT_TOKEN_TO_BE_REPLACED

"We have conducted full and thorough investigations into the crowd-related incidents that took place at both The Den and JobServe Community Stadium on Saturday 5 December 2020.

"Having carefully considered these matters, including the observations from all relevant parties, we can confirm that no formal disciplinary action will be taken against the clubs concerned on this occasion.

"However, we would like to further clarify that anyone who chooses to take the knee will continue to receive our support as they highlight the inequality and injustice experienced by the Black community.

"To be clear, we do not see taking the knee as a political symbol, and would contend that there can now be no doubt as to what the gesture means in a footballing context. Therefore, going forward, we will continue to monitor and investigate should similar crowd-related incidents occur.

"We continue to support all players and clubs that wish to take a stand against any form of discrimination, and will always condemn the behaviours of anyone that chooses to actively oppose these values."