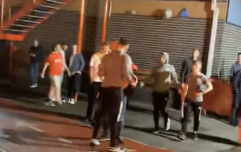 END_OF_DOCUMENT_TOKEN_TO_BE_REPLACED

Tributes poured in for him from all over the world, with his former teammate Franco Baresi bringing a bouquet of flowers to the San Siro to honour him, as well as minute's silences held all across England in remembrance of a man widely considered one of the true gentlemen of the football world.

Great moment from Milan ahead of derby: Franco Baresi bringing flowers for Ray Wilkins, holding his shirt under the Curva Sud pic.twitter.com/LfdJniM1uY

On the first anniversary of his death, talkSPORT - a radio station on which he used to appear - posted an audio clip from last year of a homeless soldier who revealed that he had turned his life around thanks to Ray Wilkins.

Speaking on the show, the caller spoke about being homeless and struggling with gambling addiction, and how a conversation with Wilkins outside of Brompton Station had helped him.

It's testament to the man that 'Butch' was.

If you do one thing today, listen to this from a homeless solider that Ray helped.