From the director of Senna, it has been described as "remarkable" and "spellbinding".

“Maradona is a God to the people of Naples. Maradona changed history. In 80 years, we had always suffered, fighting against relegation, yet in seven seasons with him we won two leagues, a UEFA Cup, two Italian Cups. I’m a fan too and to live those years with Maradona was incredible. Being on the pitch when they won the Scudetto was amazing: - Fabio Cannovaro.

END_OF_DOCUMENT_TOKEN_TO_BE_REPLACED

Who are we to question the World Cup winner?

As soon as the first teaser trailer for Asif Kapadia's new documentary on the world's most controversial footballer was released a few weeks ago, we were hooked.

There's only one Maradona.

In the new documentary, the director of Senna and Amy will be charting the Argentinian's tumultuous time in Italy and it's going to be a gripping ride.

On 5 July 1984, Diego Maradona arrived in Naples for a world-record fee and for seven years, all hell broke loose.

The world’s most celebrated football genius and the most dysfunctional city in Europe were a perfect match for each other. Maradona was blessed on the field but cursed off it. The charismatic Argentine quickly led Naples to their first-ever title. It was the stuff of dreams but there was a price. 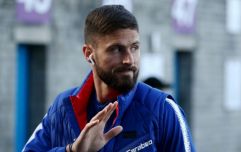 END_OF_DOCUMENT_TOKEN_TO_BE_REPLACED

Diego could do as he pleased whilst performing miracles on the pitch, but when the magic faded he became a prisoner of the city.

Constructed from over 500 hours of never-before-seen footage from Maradona’s personal archive with the full support of the man himself, this will be an essential watch.

Take a look at what's in store when it's released on 14 June.

popular
Gary Neville points out the obvious about Digby, Lord Jones
Jamaica teammates produce hilariously frosty reaction to Thompson-Herah's 100m win
A definitive ranking of every swear word from worst to best
Mourad Aliev was not happy about being disqualified from the men's Olympic boxing
Here's how to see who's been taking screenshots of your Instagram Stories
Protestors call on Dublin Temple Bar pub to "come out and say sorry" over alleged assault
The JOE Friday Pub Quiz: Week 254
You may also like
Entertainment
What’s on Netflix UK in August 2021?
Entertainment
Nicolas Cage's new thriller has 98% on Rotten Tomatoes
Entertainment
Shrek's incredibly dark three bears scene will change how you see the film
Entertainment
Man points out incredibly dark moment we all missed in Shrek
Entertainment
Pierce Brosnan thinks Tom Hardy or Idris Elba should be next Bond
Next Page