Didier Drogba hints he may continue football career after all

I guess he's not leaving? 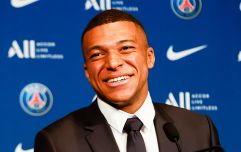 END_OF_DOCUMENT_TOKEN_TO_BE_REPLACED

The former Chelsea striker had previously announced he would call it a day at the end of this season. Cote d'Îvoire's 40-year-old hero was playing for Phoenix Rising in the United Soccer League. Proving he's still got a bit of quality left in him and scoring three goals in the three matches leading up to the cup final.

But Phoenix lost that match to Louisville City on Thursday night.

"It's really a pleasure for me to play," Drogba told Telefoot.

"I started late at the top level. I really enjoy playing - I like my role of owner-player a lot. I'm surrounded by a lot of youngsters, and I like passing my know-how on to them. But this season is the last. I'm 40, it's time now."

Drogba of Chelsea celebrates with team mates and the trophy after winning the Premier League in 2015 (Credit: Mike Hewitt)

Drogba also hinted that he would be receptive towards the idea of moving into coaching when he retires at the end of the current campaign, hinting that he would relish the opportunity of working at his former club Marseille.

"We'll have to see what is offered. I'm always ready to help.

"In any case, Marseille are showing good things this year. Rudi Garcia's project is taking shape, they're building a team with young players. It's excellent to stay in the top three with a team like that. As a fan, I have a lot of faith in them."

Well look what the wiley old bugger has just put on his Instagram:

So, Didi, is it coaching at Marseille or another season with Phoenix? Either way, it looks like he's not fucking leaving after all.