Feast your eyes upon the new Cristiano Ronaldo cartoon

Can't wait for the first season to drop

If you didn't know, that's the cartoon about Cristiano Ronaldo, a footballing superhero. Kicking balls at robots and aliens. Vanquishing them with his skill and athleticism. Go CR7!!!

Ronaldo dropped a trailer on Free Comic Book Day (May 4) for Striker Force 7, alongside a link to purchase comic books.


The machine rolls on. 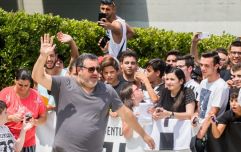 END_OF_DOCUMENT_TOKEN_TO_BE_REPLACED

In a statement on the website Ronaldo said: "In the same way football connects cultures and people around the world, I believe great animated characters and heroes can do the same and that's why I am excited to bring together these passions of football and superheroes through this project and share it with my fans."


popular
WWE stars reveal the most painful things that have ever happened to them
Is Ole Gunnar Solskjaer the worst manager in the league?
A foolproof guide to actually beating Liverpool this season
A definitive ranking of every swear word from worst to best
THE JOE FRIDAY PUB QUIZ: WEEK 175
Here's how to recover all your deleted Facebook photos and messages
Remember 'The Game'? Well congratulations, you just lost it again