He admitted making the gesture

Southampton striker Charlie Austin has been suspended for two matches after he admitted making an "obscene gesture" to Manchester City fans. 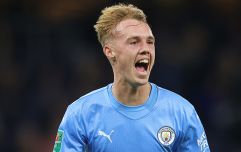 Cole Palmer plays for Man City against Burnley, then bags hat-trick for U23s

END_OF_DOCUMENT_TOKEN_TO_BE_REPLACED

The incident happened on December 30th, during Southampton's home tie with the Premier League champions.

A frustrating afternoon for Austin came to an end when he was replaced by Irish striker Shane Long towards the end of Southampton's 3-1 defeat at St. Mary's.

Austin had been booked ten minutes earlier and was on the receiving end of some goading from City supporters as he made his way off the pitch.

Sky Sports cameras picked up the Saints front man seemingly flicking the 'V' sign at the booing fans as he jogged to the bench.

In 2013, Jack Wilshere received a similar two-game ban, after he stuck a middle finger up at Manchester City fans in Arsenal's 4-2 loss at the Eithad.

In early 2018 however, Watford's Troy Deeney escaped punishment despite making the same gesture during a 4-1 victory over Chelsea.

popular
Kanye West has legally changed his name
Newcastle sponsorship deals to be blocked after Premier League clubs hold emergency meeting vote
Salt Bae's London restaurant is being flooded with negative reviews
Outcry after woman sentenced to four years for miscarriage of 17-week-old foetus
Newcastle and Brighton buy RVs for red-list internationals to self-isolate in
Facebook group dedicated to counting Wetherspoons chip portions is absolutely amazing
Nigel 'officially extinct' as a baby name as no babies registered in 2020
You may also like
Sport
Raheem Sterling reveals he's considering a move abroad from Man City
Sport
Brendan Rodgers to turn down Newcastle approach as he holds out to succeed Guardiola
Sport
Benjamin Mendy has been denied bail, will remain in prison until trial
Sport
Ranking every 2021/22 Puma third kit
Sport
Alan Shearer says Man City were 'played like mugs' during Ronaldo transfer saga
Next Page