Next time it will be a "red card"

Celtic and Aberdeen’s fixtures this week are expected to be postponed after players from both clubs broke Scotland Covid-19 lockdown rules.

Scotland First Minister Nicola Sturgeon said fans should “not expect to see Aberdeen or Celtic play this week” in a statement that warned of more severe punishments should further lockdown breaches occur.

“I regret that some football players seem incapable of living up to their responsibilities,” said Sturgeon.

“We can’t have privileged players just deciding they won’t bother. Don’t expect to see Aberdeen or Celtic play over the coming week. This is a yellow card. Next time will be red.”

The news that both teams’ fixtures will be called off follows reports that Celtic defender Boli Bolingoli travelled to Spain recently and failed to quarantine upon his return - playing in Celtic’s clash with Kilmarnock last weekend.

Celtic said the player’s actions were “beyond explanation” as they tested their squad and backroom staff twice to ensure there had been no transmission.

Bolingoli apologised, saying he was "guilty of an error of judgement", but it appears his contrition isn’t enough to prevent the Scottish government from stepping in to suspend matches. 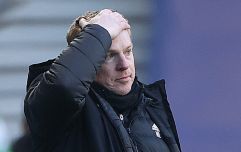 END_OF_DOCUMENT_TOKEN_TO_BE_REPLACED

Two tested positive for Covid-19 with the remaining six entering a period of self-isolation after coming into close contact with their teammates at the venue.

"The suspension of football if people continue to break the rules can’t be ruled out, but I really don’t want that to happen,” said Sturgeon after the latest breach.

“The solution lies in the hands of footballers and football clubs.”

Celtic were due to travel to St Mirren while Aberdeen hosted Hamilton on Wednesday, with both clubs set to face each other at Celtic Park on Saturday.