Ashley Cole leaves behind a lukewarm legacy of cold perfection

Ashley Cole has retired from football and the tributes have poured in, as they typically do

Well actually, they have trickled in. They have hung and drooped and slowly fallen onto our timelines like dead leaves. Given all that Cole was as a player, though, it all seems lacklustre. Underwhelming. Uninspiring.

END_OF_DOCUMENT_TOKEN_TO_BE_REPLACED

Maybe it was the timing of his retirement. Or maybe it was because Cole's football career has gradually petered out ever since the originally exciting but eventually horribly disappointing free transfer move to Roma didn't really work out.

And maybe that was because he stood in the squad photograph like this.

Congratulations to Ashley Cole on an incredible career. Enjoy your retirement - and good luck with whatever comes next! 👏 #ASRoma pic.twitter.com/ogR54UpCY9

END_OF_DOCUMENT_TOKEN_TO_BE_REPLACED

Most of all, there doesn't appear to be much feeling behind the sendoffs. Much sentiment. Much emotional weight, as there usually is. It was all pretty much an open and shut case of listing his honours and 107 caps for England along with affirming the point that of England's so-called 'Golden Generation', Ashley Cole was the only one that was ever - undeniably - the very best in the world at his position.

He was, in that most overused and misused of phrases, world-class. But genuinely so. Unavoidably so. It was never mistaken for hyperbole. It was just a fact. Whereas Beckham, Gerrard, Lampard, Scholes, Owen, Rooney, Ferdinand and Terry all arguably burned brighter at the very peaks of their careers, none ever really held the mantle of superiority over their foreign counterparts like Cole. And he did so for the best part of a decade.

He was, for many years, the best left-back in the world. No ifs, buts or maybes. Swap in their respective positions. You can't truthfully say that about the others. 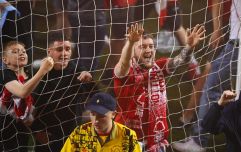 END_OF_DOCUMENT_TOKEN_TO_BE_REPLACED

So to give a player like this nothing more than a pat on the back and a 'well done on all the trophies' doesn't seem right. Or fair. Or accurate. It doesn't sit well. Whatever you think of the man, can we not herald him at least a little bit? Can we not celebrate Ashley Cole? Is it even possible to?

I think it's fair to say that, generally speaking, he is not a well-liked player. That's not a stretch. This is partly due to the infamous 'Cashley' saga early in his career as he moved from Arsenal to Chelsea in search of better pay (a perfectly reasonable decision, one that wouldn't make us blink had it happened now), the way that was portrayed, his own recounting of having "nearly swerved off the road" upon hearing Arsenal's offer, and the lasting, damaging impact that had on his image. However wrongly.

It is also partly due to the tabloidisation of his personal life, most often about his relationship with the pop singer Cheryl. Cole was as relentlessly consistent on the front pages of newspapers as he was up and down the left flank for club and country. He wasn't alone in that, of course. The entire Golden Generation were often found underneath exclamatory, pun-ridden headlines, neatly folded up on van dashboards throughout the 00s.

But for some reason, it seemed to negatively affect Cole's reputation more than the rest, that because we didn't really know much about the searing left-back from East London other than what we saw on the pitch - which was a consistent, sustained brilliance - the front page splashes we saw off it tended to be granted more of a focus. More of a hold on the public imagination. You couldn't fault his performances but there was plenty else. You do tend to kind of lose the right to affection when the rags keep claiming you're cheating on your wife and you shoot a sports science intern with an air rifle.

Which is my point, I think. Part of the reason Cole suffers is that, in terms of personality, his isn't as powerful or as obvious as many of his England contemporaries. There has been no considerable perception of him formed organically, without interference, like there has with other big-name cults of personality players that surrounded him. At least with them, we could pretend. We could project. Cole, instead, was always something of a blank, shapeless form. All we've got, even after all these years, is that he was really, really good at football but, quite possibly, a bit of a dickhead. Potentially even a massive one.

Tell me, honestly, that isn't the very base level interpretation of most footballers anyway. Because it is. It's the starting point he has never managed to move on from.

Combine that with his abilities as a player - a perfectly rounded modern full-back with no weaknesses or inefficiencies, a beacon of consistency and a keystone of some of the best Premier League teams of the last two decades - and you're not really left with much meat on the bones. Beckham had the redemption arc. Scholes had the whole 'shunted out to the left-wing despite being our best central midfielder' narrative. Gerrard and Lampard had each other. Rio had Rio's World Cup Wind-Ups and that lasting phrase "You've been merk'd!". Rooney had 'Wazza', his blistering Euro 2004, his coming undone in the World Cup in 2006 and just about everything else after that. Owen had a similar wonderboy status early on before being cruelly scythed down by injuries. John Terry became something of a pantomime villain if you weren't a Chelsea fan, his tragic slip in Moscow, and tears afterwards, cheered the world over. They all had their faults and their successes which were jumbled up into something - an idea of who they were. This didn't really happen with Cole.

What room was there for people to really care much about Ashley Cole? Everyone accepted how good he was - he is one of very few England players to have been granted complete unanimity in his standing and legacy by supporters - and everyone pretty much accepted that, well, we wouldn't care much about him. He was always there, he was always really good, he was always in the papers. The end product of that was a weird kind of ambivalence. Fine. Whatever.

Think about how rare those two things are. That everyone thought he was world-class, the best left-back in the world, and yet having nothing else to say about him beyond that. It's baffling. How often have England ever had the de facto best player in the world in their position? At the moment there is Lucy Bronze. That is completely thrilling and, quite rightly, a huge source of pride for a lot of people. But I'm struggling to place exactly how it felt with Cole. And that's never a good sign.

Why didn't it feel thrilling then? Why weren't we proud of him?

That's obviously quite sad, and not exactly fair. For a generation of football fans, though, he is the single best full-back they have seen play the game. His duels with a young, frosted-tips, Vodafone-sponsored Cristiano Ronaldo have become the stuff of legend. His performance in the 2012 Champions League final was as good as you will ever see from a defender and vital to the Blues winning the Champions League that Abramovich had strived for since he bought the club. It should all really count for a lot more.

All of his teammates to a man, felt the monumental pressure of the national team at one point or another. The leaden, rain-soaked weight the Three Lions badge and glistening white gave them in comparison to the breezy effortlessness of their performances at club level. That is not their fault. They are human, and the expectations placed on them by the English supporters and media through the decade - 2000 to 2010 - were unhealthy.

It never happened to Cole, though. It was a regular occurrence that players were blamed for 'letting their country down' by the fans and media alike. That was never a stone you could cast at him. That's probably why he remains unloved and relatively unheralded. He lived up to everything. The expectations that you have of a world-class player. And he did so comfortably. He retires a serial winner and a 100-cap player even if the mood doesn't feel like it. Maybe there was a kind of boredom to that and that's why his personal life took hold and stuck rather than any substantial celebration of his genius on the pitch.

He's a flawed individual. That much is clear. But as a player, he was close to faultless. That doesn't make everything OK, of course. Not in the slightest. But as we all grow old and the ice caps melt and the earth slowly dies beneath our feet I think it's fine to hope that one legacy outlives the other. That one of the best footballers England will ever have is remembered, well... is remembered for being just that.