"People would think the guy would eat a truckful. Nah man."

END_OF_DOCUMENT_TOKEN_TO_BE_REPLACED

Fury has often battled with obesity during periods away from the ring. After agreeing to a rematch with Wladimir Klitschko back in 2016, Fury said he had "no motivation" to go ahead with the fight.

At his heaviest, he weighed around 150 kilograms, and also experienced severe bouts of depression.

Last year, The Gypsy King told JOE: "I'm a two-time heavyweight champion of the world and I've never had a good body, ever."

"The Rock is bald and he's the most famous actor in the world. The Gypsy King's bald and it doesn't bother me!"@Tyson_Fury says going bald is beautiful and something to be embraced. pic.twitter.com/VmNrRvWYHS

END_OF_DOCUMENT_TOKEN_TO_BE_REPLACED

A former US Marine and MMA fighter, Lockhart is one of the most renowned nutritionists and weight-cutting specialists in the world of combat sport. 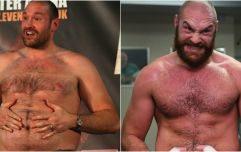 END_OF_DOCUMENT_TOKEN_TO_BE_REPLACED

Lockhart admits to being surprised by Fury's eating habits.

"The only thing weird about Tyson is how much he eats," he says.

"People would think the guy would eat a truckful. Nah man. He'll be like, 'Do I have to finish this?'

Lockhart says that on one occasion, 126-pound featherweight Isaac Lowe was given most of Fury's unwanted food, and wolfed it down in 20 seconds - much to the amazement of the nutritionist.

"He didn't use to eat a whole lot of bad foods, but it [weight gain] would come from snacking and stuff."

The last time the pair worked together, Fury managed to blitz a serious amount of body fat in a short space of time.

"The last time I went to his house, there was no fight scheduled. So it was a month. And we made it a goal to just lose as much fat as possible. We lost 30 pounds in 30 days."

Speaking exclusively to JOE, Lockhart said that in order to kickstart his weight loss programme, he had Fury follow an unconventional fasting protocol.

"He fasts once a week, every week."

This fast lasts the whole 24 hours, according to Lockhart, who chuckles to himself when he says:

"But every Thursday, we'd fast."

Lockhart asserts that Fury's performance didn't suffer from going without food for a full day.

"It became easier and easier for him, but he would drop body fat and everything else and the performance was good to go."

The problem with intermittent fasting

Some studies indicate that short-term fasting periods of between 24 and 48 hours may work via a process called autophagy.

Lockhart says: "In terms of fasting, autophagy is one of the biggest benefits. It's the recycling and regeneration of cells.

"To do that, you need to be in a certain state, and the way we do it is having our fighters do an extended anaerobic workout to deplete carb stores, then we'll have them fast for 24 hours followed by an aerobic workout."

Lockhart isn't a fan of intermittent fasting, however, stating: "I know I'm probably gonna get a lot of slack for that."

The problem with intermittent fasting is in the way most people conduct it, he says.

"A lot of people don't understand that fasting isn't about depletion of calories. If you lose it when you fast, as soon as you start drinking water or eating, you're gonna gain all the weight back."

"His training didn't change at all, but I changed his nutrition. A lot of people don't realise that you can train your butt off, but if you eat like crap, you're not gonna lose any weight."

"His favourite food is fish and chips." 🍟

"I said ‘There’s no way on God’s green Earth I can make you that!’"

This is how @Tyson_Fury lost 30 pounds in 30 days, according to his nutritionist @LOCKloaded pic.twitter.com/O6UuBNd01f

"Typically, his first meal of the day... He loves Greek yoghurt. Fruits, I put flax seed, honey on top, lots of fruits and then walnuts.

"The fruits are there to fuel the brain and the Greek yoghurt I like for the [digestive] system. Just a real clean meal.

"His [Fury's] number one go-to food is poké. He loves poké. And he likes fried rice. When I say fried rice, it ain't fried rice.

"I've got to make it with cauliflower - it simulates fried rice."

Fury has one salmon a day, in addition to poké, with the omega 3 fatty acids in oily fish providing vital anti-inflammatory benefits.

The Gypsy King's fondness for fish does need to be reeled in at times, however.

"I had them out in England and there is no way on God's green Earth I can make that!"

Across the pond, takes on this British classic are even unhealthier according to Lockhart.

"I'm not saying it's not healthy in England because you guys lightly batter it, whereas in America, it's like... All batter.

"You'll get a chicken nugget of fish."

Fury is continuing to work with Lockhart in the run-up to the third Deontay Wilder fight.

"This fight people are going to be shocked, man. He's going to look amazing."